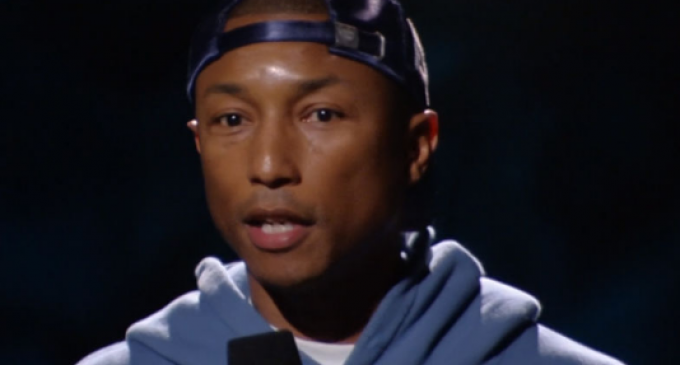 Mega-producer Pharrell Williams isn’t “Happy” to live in America, with Donald J. Trump as his President. Even more alienating (no pun intended) is his public disdain for the “deplorables” and those in favor of building a border wall between the U.S. and Mexico.

Williams gave a very politically charged anti-Trump speech at the VH1’s 2017 Hip Hop Honors: The ‘90s Games Changers, in which he ordered viewers to “open your eyes” and think like him.

It would appear as though the “Come Get It Bae” hitmaker takes the same approach to illegal immigration (talk about an oxymoron) as he does to his lovemaking. Except much like Williams would be unable to satisfy the mass throngs illegally crossing the border, America lacks the economic stamina and resources to support the influx of illegal labors, being as it comes at the expense of naturalized citizens.

You’d think famous singers and producers would let their music do the talking. But, Pharrell Williams believes he is a (black) white supremacist and a “deplorable” if he doesn't go along with Hollywood and tell all us working class people how to think. Continue to the next page to find out why Pharrell Williams wants to replace “deplorable” U.S. citizens with illegal aliens because they are better people.