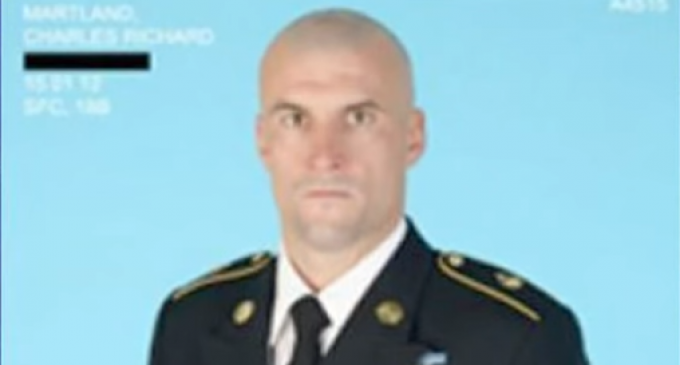 The career of Green Beret, Charles Martland, has been talked about quite a bit over the past several months. If you've been following the talk, you're aware that he's due to be expelled from the Army for protecting a young boy from sexual abuse by an Afghan police commander. Over there, the disgusting practice of Bacha Bazi, or “boy play”, which is the use of young boys for sexual entertainment and pleasure is not only a common occurrence, it's a cultural one.

Martland confronted the man who did it and then forced him off of the U.S. military installation. For this, he was issued a Letter of Reprimand and informed that he would be removed from the military in six days. Since that incident, a lot has happened. Martland appealed his case to the Army's Enlisted Special Review Board and had his appeal denied. But after more politicians got involved, things started to look up.

After Representative Duncan Hunter (R-CA) got involved in Martland's case, he introduced the Martland Act in Congress, which would expand the scope of child abuse that service members are allowed to intervene in.

Ninety-three members of the Unites States Senate and the House of Representatives also demanded an investigation from the Department of Defense. This bi-partisan push resulted in an investigation (which is ongoing) by the Special Inspector General for Afghan Reconstruction (SIGAR). This IG investigation will look at the culture surrounding Bacha Bazi as well as the incident involving SFC Martland.

Three weeks ago the U.S. Army granted an extension to SFC Martland until May 1st in order for this Green Beret to complete the process of his appeal to the Army Board for the Correction of Military Records. Martland’s appeal packet to this board was submitted months ago; thus it appears that the extension until May 1st is in order to give the board more time to look at this brave soldier’s appeal. I believe that the extension given to SFC Martland, and the meticulousness that the Board for Correction of Military Records is exhibiting, has much to do with the pressure being brought to bear, not only by members of congress, but by you: The supporters of the American Center for Law and Justice.

The name, Army Board for Correction of Military Records, is a bit misleading. It sounds as if this board works to correct material mistakes in a person’s military record. However, this board’s central purpose is different. The Army Board for Correction of Military Records is one part of the Army Review Board Agency. This board serves as the highest administrative level for review of personnel actions taken by lower levels of the Army. It has the capacity not only to correct errors, but to remove what the board identifies as injustices from Army military records after all lower level remedies have been exhausted.

This is the last chance for Martland to save his career. If the Army Board for Correction of Military Records sees the situation for what it is and reverses it, Martland will be able to stay in uniform. If not, the only people who can save him are the Secretary of the Army and the President of the United States, and we all know how at least one of them will side. If you haven't signed the petition, please do.