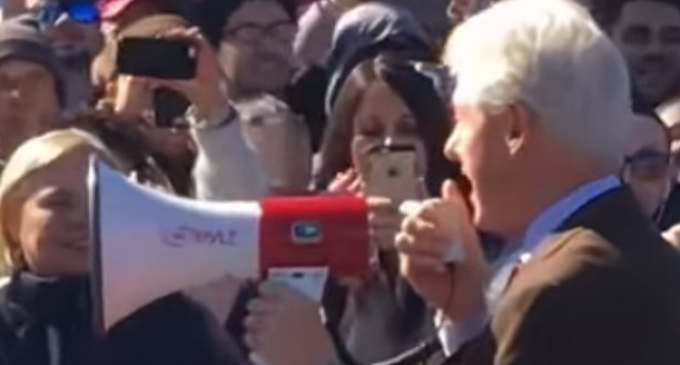 Even after his 8 years in office, Bill Clinton continues to break the law in service of his and his wife's political ambitions.

The former president has taken to the campaign trail in order to get Democrats to rally behind Hillary as she struggles to fight a mutiny by Bernie Sanders supporters that could cost her the party nod. One of latest appearances has particularly incurred the wrath of Sanders voters however.

Just this Wednesday, a Sanders supporter in the Chicago area filed an online petition to arrest Clinton for breaking federal election law. The petition quickly gained momentum, with it receiving over 65 thousand signatures in under 24 hours.

The claim arises from Clinton's holding a rally for his wife's campaign just outside a Massachusetts polling station, activity that he as a former president should know is expressly prohibited by law. Yet, photos and video show him trying to sway voters Hillary's way only feet outside the station.

See video of Clinton blocking voters on the next page:

Just like he did when he was in the White House, Clinton is playing dumb and refusing to comment on the serious allegations leveled against him. Instead, he is passing the buck onto the Massachusetts Secretary of State, who in turn passed it on to one of their spokesmen:

“According to Massachusetts election law, ‘[N]o person shall solicit votes for or against, or otherwise promote or oppose, any person or political party or position on a ballot question, to be voted on at the current election… within 150 feet of a polling place.'

‘You’re blocking the voting poll,' a New Bedford woman can be heard telling Clinton in one video, as he thanked Hillary supporters in the crowd.

A spokesman for Bill Clinton, who refused to comment on the allegations, instead referred reporters to Massachusetts secretary of state spokesman Brian McNiff.

‘No one was prevented from voting,' McNiff said about the New Bedford incident. ‘The city and voters were notified well in advance of the event.'

You can find the petition HERE.