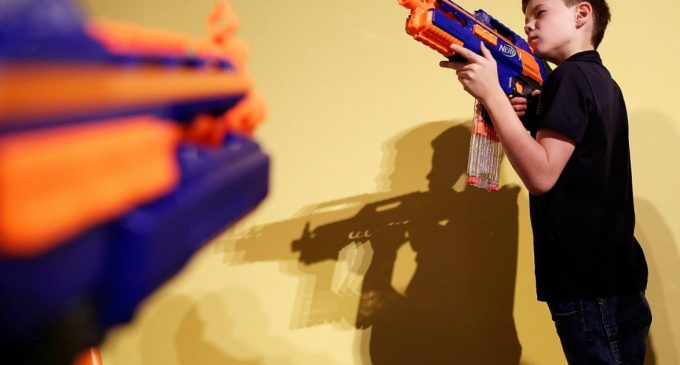 “There is one president with bodyguards. Everyone else tries to eliminate or shoot the president,” the party’s description read.

Some members of the community felt that the game's theme was sending the wrong message to kids.

“I think it’s unfortunate that they chose that kind of theme only because of the atmosphere we are living in now,” said Julie Berghaus, of Cleveland.

“I wouldn’t say it was anything political or a statement about politics. I think the game was made up just for kid fun,” said Samuel Fravel, a former OPA student.

“For kids, it’s just fun, but they don’t realize what they are being taught subconsciously,” added Berghaus.

According to Adam Sheldon, director of the Baldwin Wallace Community Arts School, BW acquired OPA January 1 of this year.

“I was certainly shocked to learn this existed. It’s certainly not something that is in our institutional values at Baldwin Wallace,” Sheldon said.

They are in the process of turning the building into the Community Arts School and they were not aware that kind of party was listed on OPA’s website.

“As part of the transitioning, we are reviewing all of our communication sources and current programming. I assure you that certainly does not fit into the program of Baldwin Wallace,” added Sheldon.

“We apologize for the description on the website that is currently undergoing renovation. It’s not something that will be present for sure,” said Sheldon. The director of Baldwin Wallace Community Arts School which owns the community center, Adam Sheldon, tweeted an apology on Saturday.

“Baldwin Wallace acquired Olmsted Performing Arts on January 1, 2019 as part of our new Community Arts School. This party theme, ‘The President,’ which was posted under previous OPA management, is in poor taste and does not reflect the values of BW.”

Baldwin Wallace acquired Olmsted Performing Arts on January 1, 2019 as part of our new Community Arts School. This party theme, “The President,” which was posted under previous OPA management, is in poor taste and does not reflect the values of BW. 1/2

As soon as it was brought to our attention BW CAS removed the party theme from the OPA site. We apologize to anyone who was offended by the presence of this theme; it does not reflect BW’s values in any way.