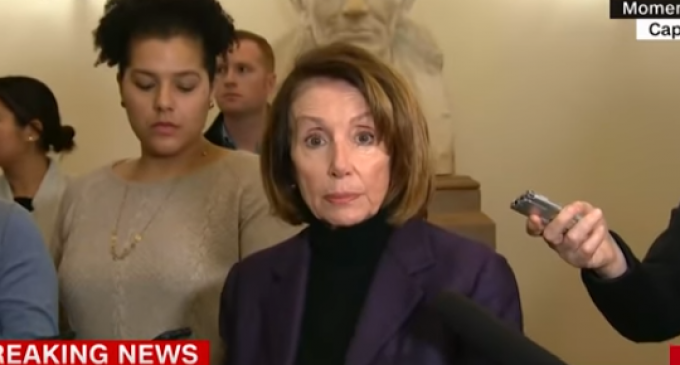 On Thursday President Trump penned a letter to Speaker Nancy Pelosi informing her that he was revoking access to the military for her flight to Egypt, Brussels, and Afghanistan, writing: “In light of the 800,000 great American workers not receiving pay, I’m sure you would agree that postponing this public relations event is totally appropriate.”

“I also feel that, during this period, it would be better if you were in Washington negotiating with me and joining the strong border security movement to end the shutdown,” he continued. “Obviously, if you would like to make your journey by flying commercial, that would certainly be your prerogative,” he wrote.

Obviously, Nancy had intended to fly with the rest of congressional members on military aircraft. On Friday, however, Pelosi accused the President of ‘dangerously’ leaking her commercial travel plans to the war zone after revoking access to what would have been travel on the taxpayer dime.

Pelosi went on to say that travel plans to war-torn countries are never announced ahead of time and Trump’s ‘lack of experience’ caused him to make the blunder, but ‘people around him should have known that.’

Feeling surreal yet? Welcome to Nancy’s world. Turn the page for the video.