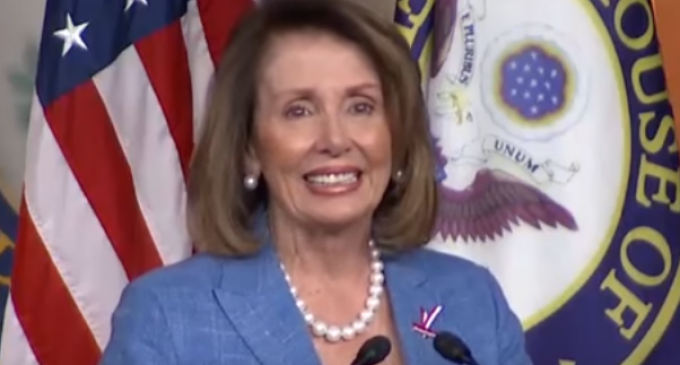 The Minority Leader of the U.S. House of Representatives has emerged from her fantasy mansion on the Hill to speak to a most attentive press audience where the former Speaker appeared to be playing to her base by constantly referring to the so-called Republicans' efforts of destroying families, children, workers rights, poisoning the air and water, and killing millions by denying them healthcare and shutting down hospitals.  Yes, she really did.

She opened her little foray into idiocy with a small introduction on how the Democrat House members were going to be reintroducing the Voting Rights Act of 1965 because of the “asinine way those morons on the Supreme Court struck down the law in 2013.”  Okay, so she didn't actually use those words, but it's exactly what she was thinking.  The “bozos” she's talking about on the Supreme Court are Kennedy, Roberts, Alito, Scalia, and Thomas.  Don't get me wrong…I'm still angry at Roberts for his completely foolish choice of siding with Leftists on the Obamacare decision, but be that as it may, she's angry at those five in particular.  Kagan, Sotomoyor, Breyer and Ginsburg of course, made up the dissenting viewpoints, but they're all Leftists on board the Supreme Court wagon.

Interesting little side note, the Voting Rights Act of 1965 basically held nine states and multiple counties and boroughs to a standard of not being able to be redistricted by the majority party without express permission by the federal government and Congress.  Meaning that, even though actual, real Black voter suppression by White Democrats in the 1960s was taking place in states like Alabama, Texas, Virginia, etc., these chosen states were not allowed to “carve up” the voting districts to favor Democrats, so that the true Black vote could be represented.  Since that has altered dramatically over the many decades, the Supreme Court in 2013 struck down the law and basically said that these states should be able to once again fairly re-draw districts without bias.  They said that the law should reflect a modern-day interpretation, not based on a 40-year-old law.  And they're right.

So, Pelosi and her good friends, John Lewis and Terri Sewell, are reintroducing the bills to reinstall a now-racist bill that will punish non-racist areas of the country.  Now for the meat of her 30-minute rant.  Turn to the following page to hear Pelosi speak glowingly about her “accomplishments!”