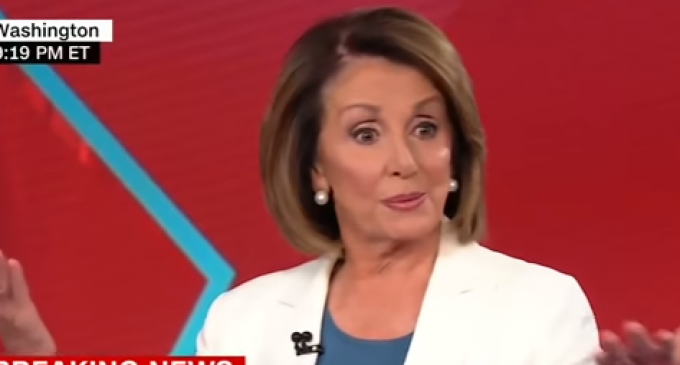 Something strange has occurred in Washington, D.C. just now that is either not being bandied about, or is being talked about behind closed doors.  It must be something of a blockbuster nature.

Nancy Pelosi has received a communique from the shadow desk of Shadow President Obama in his shadowy office down the street from 1600 Pennsylvania Avenue where Valerie Jarrett is handling out the marching orders of the party faithful and John Boehner is sharpening the pitchforks in readiness.

“REF:  Nervous Moderates…Dear Nancy, please get on the next plane to Atlanta and go on the Benny Labamba show on CNN (he’s already been briefed on what to do) and explain to the worried Moderates that we Lefties mean them no harm.  We do not want impeachment.  We are peaceful, law-abiding, and tolerant little Soros Progressives who are merely looking for a place to sit down, rest awhile and have a beer and some pretzels.  Zealously Yours, Valerie.  cc: John McCain, Lindsay Graham.  P.S.  Pick up plane tickets at the normal kiosk down by the Potomac.”

So, Pelosi appears on CNN to chat about how she doesn’t like the word “impeachment” and how resistance to Trump is really all about how much people just resent everything he stands for and everything he wants to do in government, not really about how they just want him impeached.

There has got to be an explanation somewhere that explains this bizarre behavior.  Are the Democrats working damage control over their Los Angeles stepchild, Maxine Waters, and her penchant for insufferable foot-in-mouth tirades?  Is there a scramble to tamp down the whole Seth Rich controversy that’s been swirling as of late?  Perhaps it’s the questions about John Ashe and Shawn Lucas and their mysterious deaths.  A weightlifting accident?  Really?

Maybe it’s just that they’re attempting to get back in touch with their masculine side.  Their feminist side has been running things for a while, what with Hillary Clinton throwing fits about not being elected due to misogyny, the Russians, Comey, electoral inconsistencies, and racial disenfranchisement by the Right.  Perhaps they figured it was time to demonstrate a teensy bit of toxic masculinity in order to get back on track with their more sensitive Metrosexual side.

Whatever the reason for this sudden call to arms in the name of denouncing talk of impeachment, Pelosi willingly (and apparently without enough sleep, medication or some combination of the two) jetted off to the nearest CNN makeshift studio to film her guest appearance on Labamba’s show.

I’m pretty sure they should have spent a little more time on providing Valium than on her make-up and the fifteen espressos.