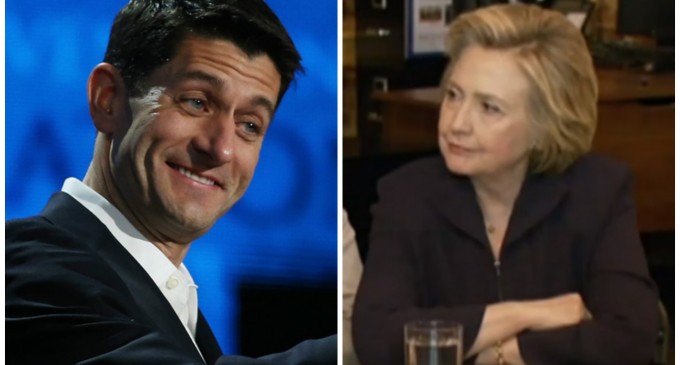 Whose side is Paul Ryan on? That of the American people or Hillary Clinton?  With the recent media attack against Trump, one would hope that the Speaker of the House would at the very least stand with the GOP nominee for President.

Issuing a statement on Sunday, siding with Hillary and Khizr Khan, Ryan “disavowed the use of a religious test” when permitting foreign migrants to enter the country.

He stated, “As I have said on numerous occasions, a religious test for entering our country is not reflective of these fundamental values. I reject it. Many Muslim Americans have served valiantly in our military and made the ultimate sacrifice. Captain Khan was one such brave example. His sacrifice — and that of Khizr and Ghazala Khan — should always be honored. Period.”

This is not the first time Ryan's positions have aligned with pro-immigration leftists.

“I do not think a Muslim ban is in our country’s interests,” Ryan said during his press conference this morning. “I do not think it’s reflective of our principles.”

Ryan said he stood by his comments against Trump’s proposed ban in December 2015 after the attacks in Paris in which he described it as “not conservatism” and “not what this party stands for.”

Ryan urged Americans to remember that the fight was against radical Islamic terrorism and that the majority of Muslims were peaceful and important allies in the fight against terrorism.

“This is a war with radical Islam, it’s not a war with Islam,” he said. “Muslims are our partners. The vast, vast majority of Muslims in this country and around the world are moderate, they’re peaceful, they’re tolerant.”

By aligning himself with the left on this issue, Ryan alienates many conservatives and Trump supporters.

Read more of Ryan's double agent behavior on the next page.