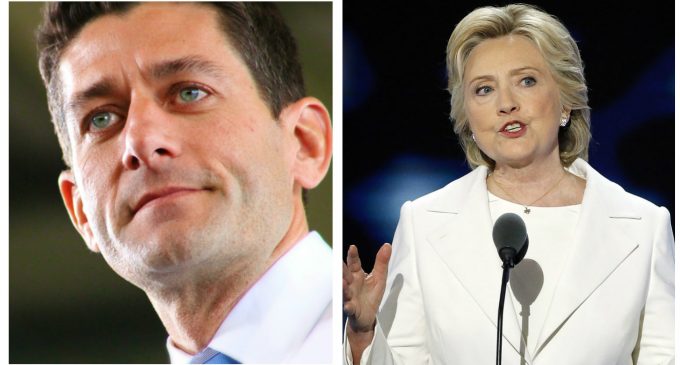 It's the sort of thing that infuriates conservatives.  And it threatens to devastate the Republican Party.  And while there are many examples of it, two words sum up the problem, “Paul Ryan.”

Democrats, for whatever else one might want to say of them, stick by their party's candidate.  It's at the point where one has to wonder if there is any degree of corruption or any series of illegal acts by Hillary Clinton that would cause them to bail.  While some of the rank and file might decide that enough criminality is enough and jump ship, don't expect to see anyone of prominence in the Democratic Party departing from the Hillary Clinton cause.

Not so with the Republicans.  As a result, Donald Trump doesn't have to defeat just Hillary, the DNC, major media outlets, and other groups allied with Clinton, he also has to defeat prominent Republicans such as the Speaker of the House, the chairman of the RNC, and powerful Republican office holders.  It's a disgraceful task to place on your own party's candidate.

Trump, for his part, isn't backing down as you can see in the interview on page two.