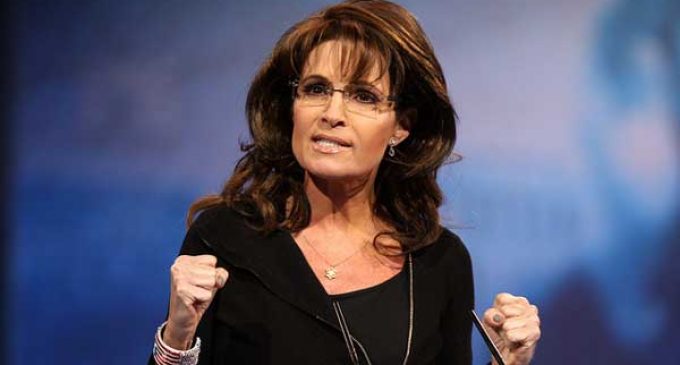 Sarah Palin has got to be the female version of George W. Bush when it comes to 100% constant bashing of a political figure on the Right.  I cannot even fathom the disgusting, vile, disingenuous, and intellectually dishonest things that the Left has said and written about this woman, simply because she doesn't toe the fairer-sex line and agree with the harpies of the Femi-Nazis.

I can still remember the war waged nearly overnight after the whole “They say the difference between a hockey mom and a pitbull – lipstick,” quote and how there was already a dossier of destruction awaiting the editors of every Leftist newspaper, magazine, and TV news program for the announcement of McCain's running mate, no matter who it happened to be.  Luckily for the media, it was Sarah Palin, one of the few names that had already been dropped to the press by a compliant McCain campaign, otherwise they might have to scramble around and make up news off the cuff.

What a shame, though, that it always comes down to Leftist misogyny as a knee-jerk reaction to a Conservative woman saying anything even remotely popular and not following the gender narratives of the Progressive despots.  Honestly, all Sarah has to do is breathe and the media loses its mind.  I can still remember her calling them “lamestream” in her farewell address to Alaska, when she was stepping down in order to take the myriad distractions away from the 49th State.  She knew that we didn't deserve it and, rather than put herself before the well-being of Alaska, she stepped out of the limelight, damaging herself and her livelihood, in an effort to protect her precious family that were under fire from day one.  Think about the sheer shameful and iniquitous way that these media jackasses managed to destroy her family's life and liberty all because McCain's campaign manager called her one day at the Governor's Estate in Alaska to ask her to be his running mate.

But…really…what do we expect?  Civility.  Moral clarity.  Gentlemanly and ladylike behavior?  From the press!?

The New York Times, which has never successfully argued that it's not the Gray “Progressive” Lady, was one of the staunchest haters of Sarah out of a slavish and sycophantic obligation to appease the Leftist readers.  They have never let it go.  Recently, they published yet another in a long line of literally thousands of political hit-pieces on Palin, spewing the normal bile that typically is ingested daily by the Liberal loyalists, and (as is their wont) they threw in a few outright slanderous statements and idiotic innuendo designed to work their base up into a frothy frenzy.

This time, they went one step over the line and Mrs. Palin has decided enough is enough.  Read about her efforts to knock out the Gray Lady's dentures on the next page.