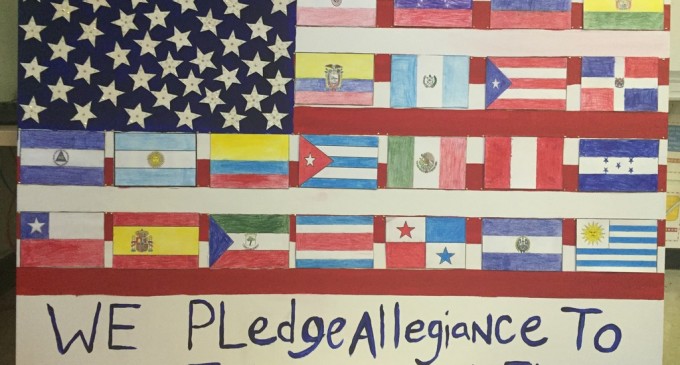 If you take the time to think about it, liberals, guided by globalist initiatives, have been quite clever in their plans to destroy America. Not only are their contradicting ideas on social issues dividing the country one “controversy” at a time, their globalist indoctrinations are specifically targeting the young and uninformed.

It's no secret that American public schools are controlled by the left. Yet, you only hear about it from specific news sites. Is the media covering it up or has this just become what's normal?

Kindergarten students from a public school in New York recently took part in a class project, where they were forced to create an American flag with the flags of twenty-two other nations acting as the stripes. Beneath it were the words, “We pledge allegiance to an international flag.” Kindergarten is a young age to be teaching kids to be anti-American. And that's not even the most shocking part about it.

See what flags were on it on the next page.