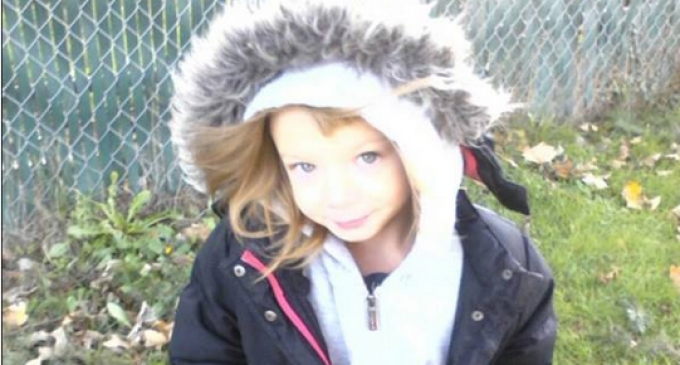 In a case of what can only be thought of as outright kidnapping by Child Protective Services, Angela Borths from Oregon has had her children seized because her 6 year old daugther is ‘too short'. Nevermind the fact that the mother is short, standing under 5 feet tall, the state of Oregon has decided that Borths is subjecting her children to “medical neglect” because of their height and because the mother missed an appointment for her son after a 2 month lapse in their Obamacare insurance, according to Borths.

Borths' pediatrician calls the daughters stature a “failure to thrive” even though an endocrinologist has described the little girl as well-proportioned – that her bone structure is ‘just right' for her size. Borths describes her daughter as being creative, funny, very intelligent and in good health. But that hasn't stopped CPS from kidnapping these children based primarily on the report of one pediatrician.

“I shouldn’t have to defend my family for being short.”

Please see the contact information at the bottom of this post to help reunite Angela with her children.

Posted by Mad Angel's Journey to bring her kids home on Tuesday, March 17, 2015

Mother’s History as a Foster Child Makes Her a Target?

It isn’t the first time CPS has been involved with Angela Borths. Angela says she has never committed any crimes, has never done drugs, and isn’t a drinker. But she does have one serious strike against her – she spent some of her own childhood in foster care. That, she says, makes her a target. She is certainly not the first person to report toHealth Impact News that being in foster care as a child has put her in the crosshairs of CPS when raising her own children.

After she grew up and got out of the system, she determined to rise above her upbringing. Angela has a ready smile and bubbly laughter, born out of a tenacious dedication to overcome the obstacles that have come her way. She worked for several years as a surgical dental assistant, often working with very sick children. She later channeled her love for children into a career working with Scholastic book fairs. Her life is the classic American tale of an overcomer, refusing to let the events of the past destroy her present. However, she has remained under the shadow of Child Protective Services. Angela describes several events where CPS decided to get involved, even though there was never any evidence of wrongdoing on her part. When her first baby suddenly became very sick, she took him to the Emergency Room. He was later diagnosed with cystic fibrosis, a serious genetic disease, but that was not until after CPS stepped in and accused her of medical neglect. Even though cystic fibrosis is something that a parent cannot cause or stop, the charge of medical neglect was never purged from the records. She lost custody of her first child to his father, who then moved out of state.

Years later, in 2012, Angela’s family was living with her mother in an older home. No one realized that lead paint had been used on the walls. When the children tested positive for lead in their system, the parents were accused of child abuse. Their lawyers allegedly told them “that all we had to do was sign a paper agreeing to allow CPS to offer us services (so it wasn’t an admission of guilt , so we were told).” They signed the papers, not realizing that this would give CPS grounds to keep the allegations of abuse in their system. After a short time, the case was closed.

Near Christmas of 2013, Angela’s son, now 9, scared everyone in the household when he began having seizures. CPS again became involved. He was later diagnosed with a mild type of epilepsy which is typically outgrown by adulthood, known as benign rolandic seizures. The condition sometimes caused her son to be exhausted. It took some detective work to try to figure out what was going on, and he missed a good deal of school between trips to the pediatrician, neurologist, and the various tests, such as MRIs. It took a month for doctors to find a diagnosis.

Although the neurologist excused the time away from school, his pediatrician did not, insisting that he be in school and notifying CPS. During this time, Angela reports that she submitted to a drug test, knowing that she had nothing to hide. She had sinus issues going on at the time, and her own doctor had recommended sudafed and benadryl, not realizing that this combination could result in a false positive for methamphetamines. Angela was horrified, and the children were taken from her, under charges of drug use and educational neglect. The pediatrician first brought up allegations of medical neglect at this time over her daughter’s short stature. It was not until after the appeal and 14 clean drug tests later, that she won back custody of her children. The drug charge was reversed in the appeal, but the short stature allegation remained substantiated in the CPS records.

The children visited their pediatrician recently for a check-up, and Angela’s little girl remains little. She is in great health, but her doctor is concerned about her short stature, reporting it to CPS. According to Brenda Long, Angela’s mom:

“My daughter was a tiny child. So were my sisters. I never reached 5 foot 5. They were all skinny until they turned 13. Two got tall, that’s all. They are still thin. Angela cried as a child because she was so tiny. She was healthy but thin.”

Angela’s 18 year old son’s medical records read “short stature.” No one in the family knows any reason for their being short, but they know that it runs in the family. Blood tests have failed to show why they are short. Her daughter reportedly cried during a recent visit because she is taking it personally that she is short. Angela now finds herself facing accusations of medical neglect, that somehow she has done something to cause her child to be short. When the ObamaCare website went live, the media was full of reports about the difficulties that people were having in signing up for their health insurance. Angela’s experience was no different. Over the Christmas holidays, she tried repeatedly to renew her insurance with the Oregon Health Plan. On several occasions, she was on hold for hours. On others, it was busy. It was not until February that she was able to get through the system and get renewed. During the time that her coverage had lapsed, she missed a neurologist appointment for her son. She did not, however, miss getting his seizure medication refilled. Instead, she paid out of pocket for his medication.

This lapse in coverage is allegedly included in the charges of medical neglect.

Angela’s former “drug problem,” which was allegedly based on a false positive, and found to be unsubstantiated in her previous appeal, is back in the petition to remove her children, according to Angela. She says her attorney has described the current petition as a “cut-and-paste” job of mostly previous allegations, accusations which were found to be unsubstantiated. However, the judge allegedly “rubber stamped” the charges, resulting in the removal of Angela’s youngest 3 children, ages 5, 6, and 9, from her home on March 3, 2015. The 18 year old is now an adult and thus is not subject to removal by CPS.

The social worker made the accusation that the children have too many absences from school. However, the records show that the majority of these are tardies, for which Angela is not responsible. She walks her children to school in the morning, where they eat the school breakfast. Because the kids are already in the school’s care, their mother has no control over when they arrive in the classroom after breakfast.

Angela says that she has records and documentation to prove, like before, that any and all allegations against her are false. Angela says she was stunned when the court took her children, because she says that there is no evidence of harm or risk of harm. But that didn’t stop her children from being taken from their home and their mother who loves them. Again, she is living every mom’s worst nightmare of having her children taken away.

Angela is known in social media circles as “Mad Angel,” fierce advocate for truth and justice for families, and she is determined to fight for her children with everything she has. She has set up a Facebook page so that supporters can follow Mad Angel’s Journey to bring her kids home.

“My whole world revolves around my kids, and everybody knows that.”

Oregon’s Governor is Kate Brown, whose motto according to the Governor’s website is “making government more accountable and standing up for working families.” She may be reached at 503 378 4582, or contacted here.

The Senator for the Borths’ district is Michael Dembrow. He may be reached at 503 986 1723, or contacted here.

Representative Alissa Keny-Guyer serves Angela’s district. She may be reached at 503 986 1446, or contacted here.