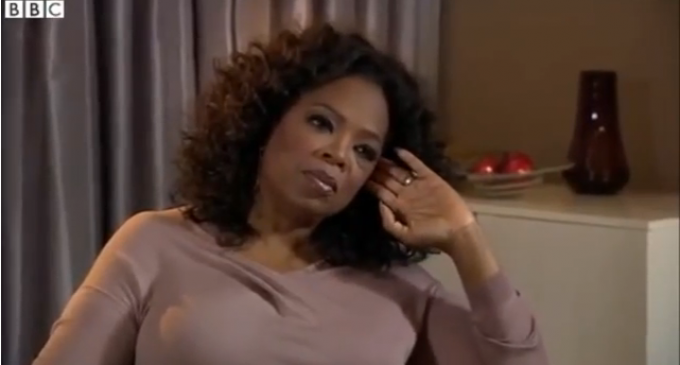 Watch this short interview with Oprah. The statement that a whole generation must die to end racism and the manner which she delivered it is pretty creepy. She knows her words carry a lot of weight and this comes across as very provocative.

She also states that the infamous calling of Obama a ‘liar’ by Rep. Joe Wilson on the Congressional floor was due to racism.

What a joke! Let’s just forget the fact that Obama’s is a well-proven liar and Rep. Wilson statement was quite accurate!

Oprah Winfrey made several racially-charged statements during a BBC interview Friday while promoting her recent film, “The Butler.”

The BBC’s Will Gompertz asked Winfrey if racism is still a contemporary issue.

Gompertz asked Winfrey if she thought the problem of racism was solved.

“Of course, the problem is not solved,” the actress said. “As long as there are people who still, there’s a whole generation – I say this, you know, I said this, you know, for apartheid South Africa, I said this for my own, you know, community in the South – there are still generations of people, older people, who were born and bred and marinated in it, in that prejudice and racism, and they just have to die.”

If President Obama weren’t an African-American, Gompertz asked, would he be treated differently?

Winfrey mentioned the time when U.S. Rep. Joe Wilson, R-S.C., called Obama a liar while the president was delivering a speech to Congress.