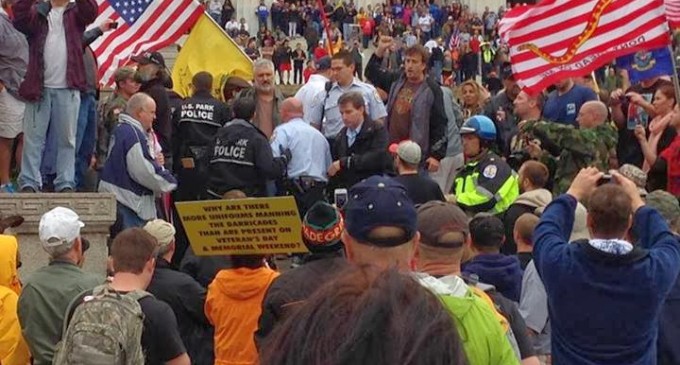 It appears that there are still around 2400 patriots holding their position in Washington, with no plans on going anywhere, according to posts on what appears to be their most active Facebook page.

When OAS kicked off, there were only a handful of patriots at the capital as heavy rains flooded camps and prevented many from marching. After that cleared we saw around 1000 or so by the night. I'm surmising these figures from posts, videos and live feeds I've seen.

The patriots that are there now await Rolling Thunder Inc., a non-profit veteran/motorcycle group with over 90 charters in the US, who has promised several hundred thousand bikers to show tomorrow, Thurs. 5/22, in support of the patriots.

If this does occur, it will be much harder for the mainstream media to ignore this movement, as they have done. It is indeed quite a commentary that even conservative mainstream and alternative media have ignored or even downplayed the event, like Drudge Report, Rush Limbaugh, Infowars, Glenn Beck, Fox News.

The only active live feed seems to be this one.

Here's an interview of Col. Riley, who's leading the event, given yesterday:

We all gathered at OAS Site, Camp Liberty early for prayer and then may went to the Capitol for meetings with Senators and Representatives. Most legislators are none committal about OAS which means they are part of the establishment, not focused on constitutional restoration. It's sad day when Senators reject information about OAS or anything for that matter. Senator Leahy and Senator Markey both rejected packages I tried to give them…these two Senators are unworthy to be listed as servants of America.

I participated with Mark Conners radio show and Jim Litney out of Las Vegas in his show this evening….both stronly behind OAS.

The Park Police and DC Police firmly have our backs……most all of them believe just as we do…….they reject the lawless leadership and should any issues break, they will be with us. They call us each morning inquiring if they can help in any way. All the naysayers, trouble makers I expect are disappointed there has been no violence….shame on you Glenn Beck.

We will be planning more marches…….it would be nice if we had many more patriots to lock arms with. We intend to form another march on the White House in support of our Marine that is held in jail in Mexico. With all due respect and sympathy regarding the girls that are captive in Africa, our men who are prisoners in Mexico, Iraq/Afghanistan deserve our first efforts.

To all those that spell doom and gloom, hope OAS fails, urge us to give-up, it will be a long summer so you might as well block any whiny misfits attacking OAS.

Churches are taking up donations for our campers to buy food for them. The hat was passed for funds to seucre a permit for the space we have on the Mall….didn't take more than fifteen minutes to reaise $350.00……..OAS patriots are being cared for by OAS.

Our security team is a fanastic group…..members from all over the US….meeting for the first time, melding into a first class,professional group. They exercise excellent judgment, heading off issues before they get started. Our Staff and State Groups are busy and serving you well………

Have a blessed day on Wednesday…….