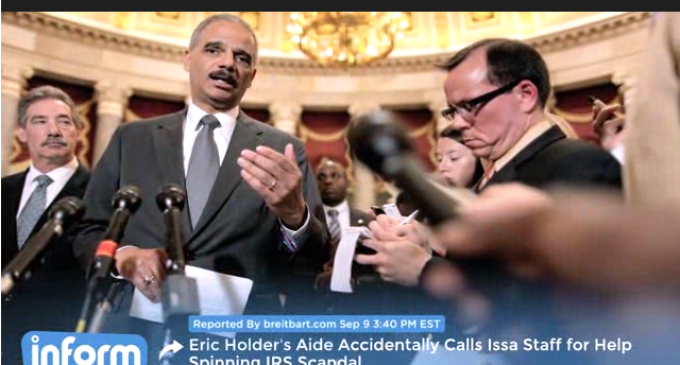 An aide to Eric Holder was looking for new ways to spin some revelations in the IRS scandal…so he accidentally calls the very office who is investigating the scandal…the office of Darrell Issa.

Supposedly the aide, Brian Fallon, was notably shaken when he realized the mistake.

Brian Fallon, former senior aide to Sen. Chuck Schumer, was “audibly shaken” when he realized that his request to leak documents to stay ahead of news about them was mistakenly made to the very office he was seeking to undermine.

The request was made to a staff member at Darrell Issa's office, who is investigating the IRS scandal.

Fallon asked if documents could be released to “selected reporters” to give Fallon an “opportunity to comment publicly on it,” obviously to spin the truth.

Sometimes governmental stupidity actually serves people….and can be quite funny.

Fallon explained to Issa aides that the Justice Department's Office of Legislative Affairs had not permitted him to release the documents to the public and he wanted to get ahead of the story “before the Majority” – meaning Issa – could share it, according to the letter.

Issa aides – who had placed the call on speakerphone – were “caught off guard by the unusual nature of the call and the odd request” and asked Fallon to “e-mail the material for evaluation.”

“At this point,” Fallon “abruptly placed the call on hold for approximately three minutes.” When Fallon returned to the call, “he was audibly shaken. He immediately stated that there was a ‘change in plans' and that there would be no effort” by DOJ to release the material early.

Fallon “proceeded to pitch the idea that the Department and the Committee should ‘help one another' while simultaneously saying that ‘you need to say what you need to say.'”

Fallon, however, said in a written statement that nothing untoward occurred.

“There is nothing inappropriate about department staff having conversations with both the majority and minority staff as they prepare responses to formal inquiries. That includes conversations between the spokespeople for the Department and the committee,” Fallon said.

Other than confirming he made the phone call in question, Fallon did not respond to any of the details of what took place during the call.