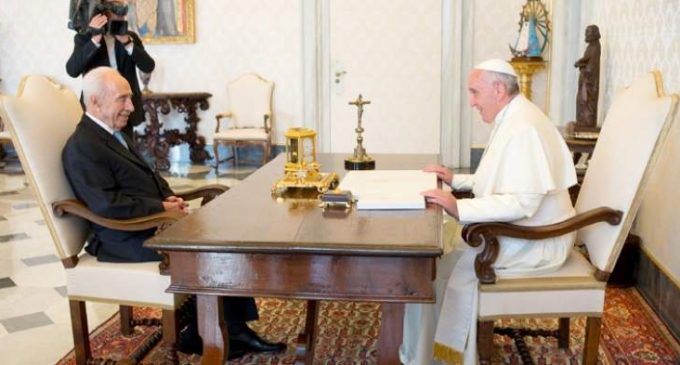 Two events have been playing out simultaneously in both the Vatican and in the Hague, Netherlands; events that appear to mark the pieces falling to place for the arrival of one world religion.

In the Netherlands, global religious leaders contributed to a video that was unveiled in the Hague on Wednesday, appealing to followers of all faiths to begin having interfaith dialogues to promote peace, understanding, and unity of purpose.

In the video, Muslim cleric Ayatollah Sayyid Fadhel Al-Milani says: “Our advice is to make friends to followers of all religions,” while Pope Francis and Rabbi Abraham Skorka say that their religious experiences have been enriched by friends from other faiths.

The Dalai Lama says that “we can exchange deeper level of experience” through personal contacts and friendships.

The idea is to get all religious leaders and followers to come to an agreement, saying, in essence, that we all agree that we're all right and nobody's wrong and can't we all just be friends. That, of course, has been a goal of many thousands of people for many thousands of years, but the fact remains that too many radicals exist that will always be there to throw a monkey wrench into the works.

Rabbi Dr. Alon Goshen-Gottstein, director of the Elijah Interfaith Institute which helped organize the joint statement, called the appeal “a significant novelty from a theological perspective.”

“We cannot deny that in the books of many religions you can find texts that are not very open, even hostile, to people of other faiths,” he said. “Therefore, when the world's most important leaders call for friendship, they are in fact affirming a particular way of practicing religion and rejecting another.”

As you can see, the push to globalize and consolidate isn't only about financial, but about religious sentiments as well. While the Bilderbergs are plotting the financial path to one world bank, this group is attempting to plot the religious path of all faiths. And while this was going on in the Netherlands, another larger entity was making strides toward this same goal at the Vatican. Turn to the next page to read about the Pope's visitor and what was discussed as well as watch the video referenced above.