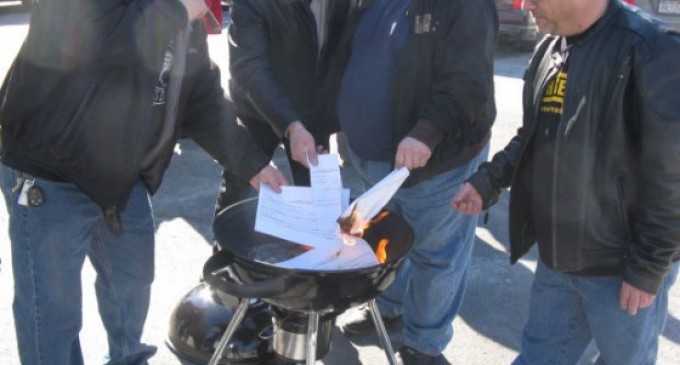 April 15th is the deadline for New Yorkers to register their ‘assault weapons', but instead most are choosing to be branded criminal and some are even joining in now-ceremonial burning of registration forms.

Estimates suggest that as few as 3,000-5,000 of the estimated 1-2 million firearms that have been redefined as “assault weapons” have been registered under Governor Cuomo’s NY SAFE Act.

What are they thinking? That we will just line up and voluntarily give up our rights? Probably these laws are now just going to sit on the books until we are in a full-blown civil war – enforcement will take place when patriots will be using them against the government.

Unofficial estimates suggest that as few as 3,000-5,000 of the estimated 1-2 million firearms that have been redefined as “assault weapons” under New York’s utterly arbitrary and blatantly unconstitutional law
have been registered. Literally dozens of gun owners in the state of 19.57 million (2012) residents will take the opportunity to register today.

With the deadline set to take effect, the head of New Yorkers Against Gun Violence — one of the SAFE Act’s biggest proponents — said gun owners should be expected to follow the law.

“They can make all the noise they want, but the law is the law,” said Leah Gunn Barrett, the group’s executive director. “The New York SAFE Act was passed by a bipartisan legislature, signed by Gov. Cuomo well over a year ago. It’s being implemented, and people are expected to comply with the law.”

Here in reality, owners of the firearms affected by the ban are choosing open defiance. Non-compliance of the ban is expected to be between 90%-99%, but a provision in the NY SAFE Act prevents registration data from being shared with the public.

Non-compliance in the neighboring state of Connecticut is thought to be in excess of 85%, with an estimated 80,000-100,000 gun owners refusing to register their firearms. Connecticut State Police have made no move to enforce their law four months after their registration deadline, fearing possible armed resistance.

Conservative estimates are that at least 300,000 and as many as one million New Yorkers will likewise practice civil disobedience and refuse to comply with the registration requirement.