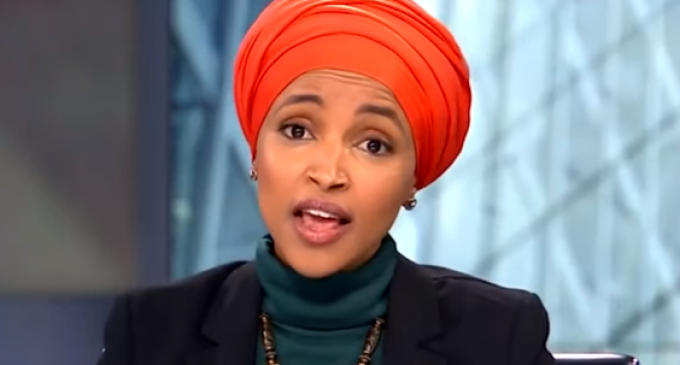 The New York Times wasted no time at all in publishing an op-ed by one of the new leaders of the Democratic party – Rep. Ilhan Omar. One might think that liberals would want to take a breather to give themselves time to regroup following the grand disaster yesterday that was the Mueller hearings, but, I guess, what’s one more disaster eh?

In the op-ed published on Thursday titled “It Is Not Enough to Condemn Trump’s Racism,” Omar regurgitated the all too familiar attack on Trump alleging racism. The worst attack being her claim that Trump “tacitly accepted” the white supremacists who chanted “Jews will not replace us” in Charlottesville, Virginia at a rally on August 2017.

President Trump, of course, has repeatedly and explicitly condemned them several times – doing so “in the strongest possible terms”

Omar makes this claim of racism in the face of newly surfaced footage of an interview with Al-Jazeera in 2018 filmed while she was running for office. In the interview, she said that Americans ought to be “more fearful of white men.” (See video below)

But the most telling passage in Omar’s op-ed is when she describes her feelings about America — the country that sent its soldiers to die in defense of her native country, Somalia, and the country where her family found refuge. She describes the discrepancy between “the America we expected to find and the one we actually experienced,” adding:

The America we arrived in was different from the one my grandfather had hoped to find. The land of opportunity he imagined in 1992 was in fact full of challenges. People identified me in ways that were foreign to me: immigrant, black. I learned that these identities carried stigmas, and I experienced prejudice as a visibly Muslim woman.

Omar never expresses gratitude toward the United States. She acknowledges that “our Constitution and democratic institutions are the tools to make it better,” but the country and its people, as they are, are simply not good enough.