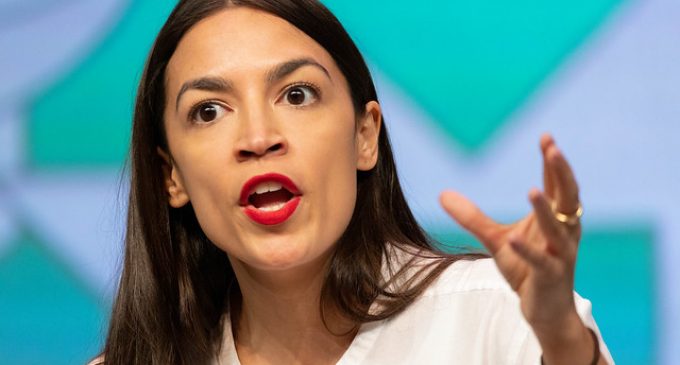 Bartender turned Democratic New York Representative Alexandria Ocasio-Cortez took a shot at Ivanka Trump over her qualifications as a diplomat following a video showing the president’s daughter and advisor conversing with world leaders at the G20 Summit.

“It may be shocking to some, but being someone’s daughter actually isn’t a career qualification,” Ocasio-Cortez wrote. “It hurts our diplomatic standing when the President phones it in & the world moves on. The U.S. needs our President working the G20. Bringing a qualified diplomat couldn’t hurt either.”

It may be shocking to some, but being someone’s daughter actually isn’t a career qualification.

It hurts our diplomatic standing when the President phones it in & the world moves on.

The US needs our President working the G20. Bringing a qualified diplomat couldn’t hurt either. https://t.co/KCZMXJ8FD9

Ghobadi framed the video footage to portray Ivanka as trying to insert herself into a conversation where she was not wanted.

Ivanka Trump appears to be trying to get involved in a talk among Macron, May, Trudeau and Lagarde (IMF head).
The video is released by French Presidential palace. pic.twitter.com/TJ0LULCzyQ

The backlash to AOC’s post was nothing short of hilarious.

Former CNN commentator Piers Morgan was one of those who hit back at Ocasio-Cortez for her comments.

Could be worse… Ivanka could have been a bar-tender 18 months ago. https://t.co/xAj8Guc3hH

Ocasio-Cortez originally responded to Morgan’s message by suggesting the government would be in a better position if more people worked regular jobs prior to be being elected.

“Imagine if more people in power spent years of their lives actually working for a living,” she wrote. “We’d probably have healthcare and living wages by now.”

Several hours later, Ocasio-Cortez further defended her previous employment, saying she is proud of her work in restaurants.

“I also worked for Sen. Ted Kennedy, piloted literacy projects in the South Bronx, studied Development Economics in W Africa, served as an Educational Director & won international science competitions before I ran for office, too,” she tweeted.

A woman who was a bartender degrades a woman who had a thriving career prior to joining Office of Economic Initiatives.

How many jobs did AOC initiate? Zero. #Amazon https://t.co/EGJJrTgKJf

But somehow serving beer is a qualification to have a career in politics. https://t.co/i39oygDXrN

Well, if anyone would know about getting a job with lack of qualifications… https://t.co/VV9ZiPfP09