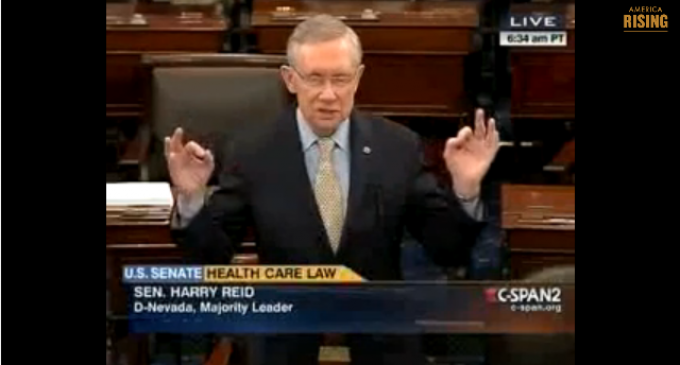 Is Senator Harry Reid (D., Nev.) pro-cancer? What is his problem? Watch the clip below and see his strange obsession with smearing brothers Charles and David Koch over and over.

The Senate Majority Leader has gone to incredible lengths to demonize a pair of anti-cancer philanthropist brothers named Charles and David Koch, to the extent that he’s mentioned them 134 times in a series of strange diatribes on the Senate floor.

Nearly all of those mentions have occurred since Feb. 26, when he first went off on the Kochs as an unsubtle means of rallying support for the flailing Democratic Party’s hopes to retain a majority.

The Koch brothers, Reid sternly warns, are “radical.” They are “un-American.” They promote “lies.” They’re trying to “buy” the country.

Strange then, that Reid once accepted money from a Koch lobbyist, if he’s so convinced of their plans to destroy the nation he loves.

Strange then, in spite of his insistence that the Kochs are out of the mainstream, that Charles and David poll better than Reid does with the American public.

Strange then, that he risks getting into trouble with the law due to his unrelenting smear campaign, as it’s possible he violated Senate rules by using his taxpayer-funded website to bash the Kochs.