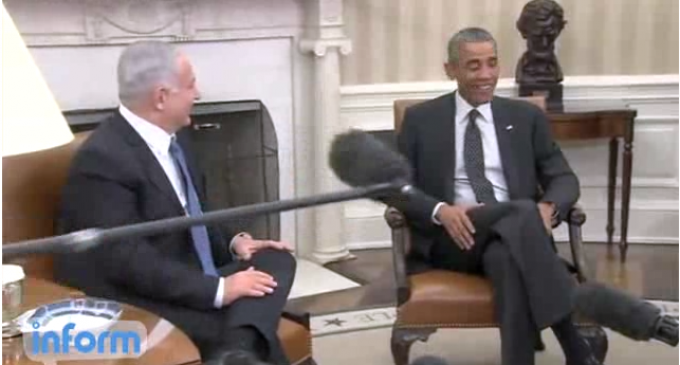 Israeli Prime Minister Benjamin Netanyahu probably knew that he was making a futile request to have the United States – at least – get Iran to promise to not to shoot those soon-to-be-ready nukes at Israel that Obama was helping them facilitate.

Obama stated in an interview with NPR, “The notion that we would condition Iran not getting nuclear weapons in a verifiable deal on Iran recognizing Israel is really akin to saying that we won’t sign a deal unless the nature of the Iranian regime completely transforms. And that is, I think, a fundamental misjudgment.”

Well, Netanyahu had to try, at least in keeping with political posture.

On Friday, one day after the announcement from the P5+1 powers that the had reached a preliminary “framework” agreement with the terrorist state, Netanyahu said, “Israel will not accept an agreement which allows a country that vows to annihilate us to develop nuclear weapons, period. In addition, Israel demands that any final agreement with Iran will include a clear and unambiguous Iranian recognition of Israel’s right to exist.”

Iran supports Hezbollah, Hamas, and Islamic jihad, all of which have sworn to destroy Israel. Iran’s own leaders have also done so, as recently as the end of March, when the commander of the Basij militia of Iran’s Revolutionary Guards said that “erasing Israel off the map” was “non-negotiable.”

Obama refusing to make Iran recognize Israel’s right to exist falls into line with his refusal to make anyone recognize Israel. In March 2014, State Department Spokeswoman Jen Psaki parroted the Obama Administration’s party line when she said of Netanyahu’s demand that the Palestinians recognize Israel as part of any agreement, “The American position is clear, Israel is a Jewish state. However, we do not see a need that both sides recognize this position as part of the final agreement.”

Obama tried to hammer home his ridiculous argument that he is stopping Iran from going nuclear, adding on Monday, “I want to return to this point: we want Iran not to have nuclear weapons precisely because we can’t bank on the nature of the regime changing. That’s exactly why we don’t want [Iran] to have nuclear weapons. If suddenly Iran transformed itself to Germany or Sweden or France then there would be a different set of conversations.”