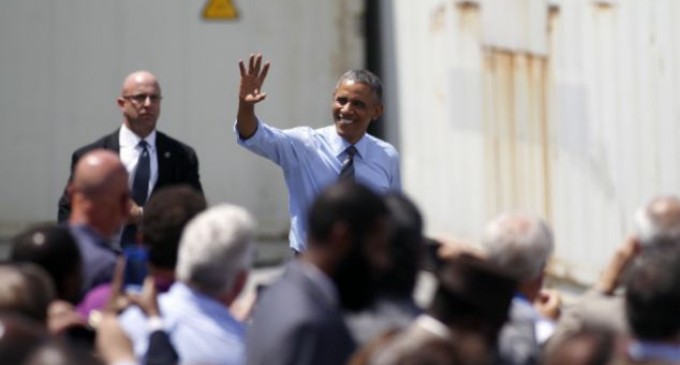 Sociopath: A person with a psychopathic personality whose behavior is antisocial, often criminal, and who lacks a sense of moral responsibility or social conscience.

Obama certainly showed no conscience yesterday when he addressed the shooting down of Malaysian airliner flight recently shot down over the Ukraine killing 295 people.

Obama devoted only 40 seconds to mentioning the deaths before moving into a  rather light-hearted 16 minute speech. The Ukraine government had announced hours earlier that the plane had been shot down and the world knew that nearly 300 people had died, but Obama's reaction was mainly that  ‘it looks like it may be a terrible tragedy.'

Obama's detached emotional state from this terrible tragedy was remarked upon by reporters on the scene:

One reported stated: ‘A tragedy is when you lose control and fly into a mountainside. This is mass-murder. What a disappointment.'

‘His distance from reality is just bizarre,' said another.

Boston Globe reporter Matt Viser tweeted, ‘Obama, in sum: A plane crashed. It may be tragic. We're trying to see if US citizens were on board. Hey, great to be in Delaware!' he wrote.

President Barack Obama provoked fury in the U.S. on Thursday by casually devoting less than a minute to the deaths of 295 people aboard a Malaysian airliner, as he began an often jokey 16-minute speech about the need to expand America’s transportation infrastructure.

There are no confirmed American dead and the White House issued a statement on Thursday evening which said they were still seeking any ‘information to determine whether there were any American citizens on board'.

An earlier Reuters report claimed that it was feared that as many as 23 U.S. citizens had perished.

Obama declared in Wilmington, Delaware that ‘it looks like it may be a terrible tragedy,' but not before enthusiastically declaring that ‘it is wonderful to be back in Delaware.' Condolences? Obama briefly mentioned the plane crash in eastern Ukraine on Thursday before launching into his prepared remarks and blaming Republicans for slow-walking transportation spending

The president's speech went on as planned, complete with laugh lines, despite the deaths of nearly two dozen U.S. citizens in what appears to have been a deliberate missile attack ‘Before I begin, obviously the world is watching reports of a downed passenger jet near the Russia-Ukraine border. And it looks like it may be a terrible tragedy. Right now we’re working to determine whether there were American citizens on board. That is our first priority.'

‘And I've directed my national security team to stay in close contact with the Ukrainian governemnt. The United States will offer any assistance we can to help determine what happened and why. And as a country, our thoughts and prayers are with all the families and passengers, wherever they call home.

Obama then jarringly quickly returned to his prepared remarks.

‘I want to thank Jeremie for that introduction' he said. ‘Give Jeremie a big round of applause.'

‘It is great to be in the state that gave us Joe Biden. We’ve got actually some better-looking Bidens with us here today.  We've got Beau and his wife, Hallie, are here. Give them a big round of applause. We love them.'

American victims? Obama spoke to Ukrainian President Poroshenko while he flew on Air Force One between Wilmington, Delaware and New York City but neither the state department nor Obama revealed if Americans were aboard MH17

Obama also acknowledged the presence of Treasury Secretary Jack Lew with a joke.

‘Jack Lew’s signature is actually on your money,' he said, ‘although it's kind of illegible. We teased him when he first became treasury secretary that he was going to have to fix his signature a little bit because it looked just like a caterpillar running along the bottom.'

From there he launched into a 16-minute speech about transportation projects he wants Republicans to fund, complaining bitterly about their objections to his end-runs around the federal legislature.

‘When I have a chance to help communities like Wilmington, I’m going to do it,' he said, as cable news networks focused on the lives lost in Eastern Ukraine.

‘That’s when my administration takes these executive actions, when Congress won’t act. And so far, the only response we’ve gotten from the Republicans is a lawsuit. They're suing me for doing my job, instead of going ahead and doing their job.'

Twitter erupted, with thousands of users expressing emotions ranging from disappointment to disgust. 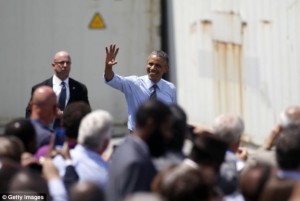