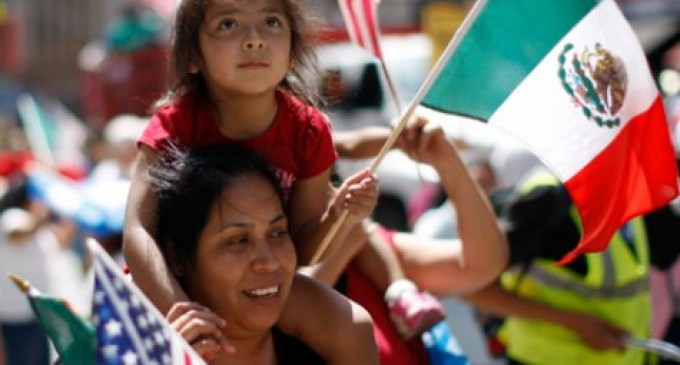 Back in March Obama told the Latino community that their immigration status is not checked when they enroll in Obamacare. So it’s free, illegal healthcare for illegal immigrants – straight from the mouth of our law-breaking president.

“Come to our bankrupt country for your free health care – because it’s our ‘responsibility’ to make sure that we completely destroy ourselves financially to give you illegal immigrants temporary healthcare. ‘Temporary’, of course, because once American implodes, well, you’ll probably just go back to Mexico. Who wants to be in the middle of a civil war, right?” (satirical Obama quote)

One more nail in America’s coffin!

The Obama administration has been helping to facilitate a series of events nationwide at Mexican Consulate offices to enroll people in Obamacare – and a key activist says the efforts are “our responsibility” regardless of citizenship.

Health Care insurance navigator groups hosted an Obamacare enrollment fair on Tuesday in the Mexican Consulate’s Brownsville office, The Rio Grande Guardian reported last Friday, where Mexican nationals among others were counseled about enrolling in the ACA.

“The Mexican consulate is a very reliable source of information to the Latino community. And therefore when they host their events, yesterday being the health fair, there are several hundred people that show up,” Medrano said.

Under the Affordable Care Act (ACA), undocumented immigrants aren’t supposed to be receiving government-run health benefits or subsidized coverage. However, President Barack Obama told Latinos in early March that the Healthcare.gov website would not be used to find out about an individual’s immigration status.

“None of the information that is provided in order for you to obtain health insurance is in any way transferred to immigration services,” he said.

According to Medrano, 101 families were represented at the ACA enrollment and education fair at the Brownsville Mexican Consulate on Tuesday and about 60 percent of them spoke to a health care counselor. Medrano says that the consulate’s office is helpful “as part of the transition” to “mainstream… America.”

According to Vegas Seven, in Nevada, the Latino community is being targeted for ACA enrollment at the Mexican Consulate in downtown Las Vegas. Insurance News says Hispanic National Advocacy groups like National Alliance for Hispanic Health have helped lead the push to get more Latinos enrolled in Obamacare.