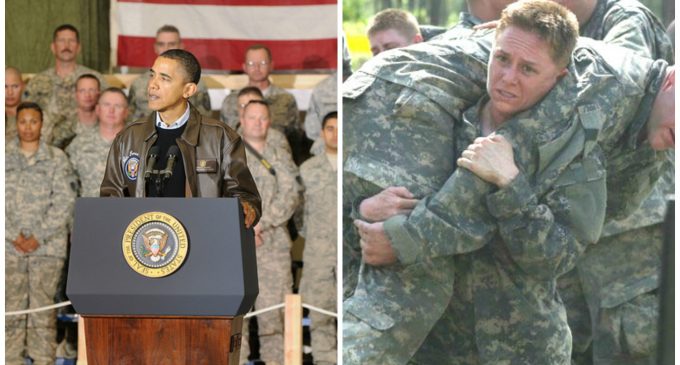 Obama thinks women are “at least” as strong as men — proving that liberalism truly is a stand-in for logic.

A year ago, Defense Secretary Ash Carter issued a mandate that allowed women into ground combat roles previously only occupied by men. But these roles were generally physically intense, and women have struggled to pass the tests necessary to fill the positions.

The reason is simple. Women generally aren't as strong as men. This fact is pretty clear to most of the world, but not to Barack Obama. Despite evidence — and common knowledge — the president doesn't seem to accept that men have a natural advantage when it comes to strength. He would rather cling to the liberal ideal that all people are exactly equal than admit that men and women are inherently different.

And he takes it one step further. He thinks women might actually be the stronger sex, or at least alludes to it — because the left has no trouble insulting men.

Watch Obama suggest that men are actually weaker than women on the next page: