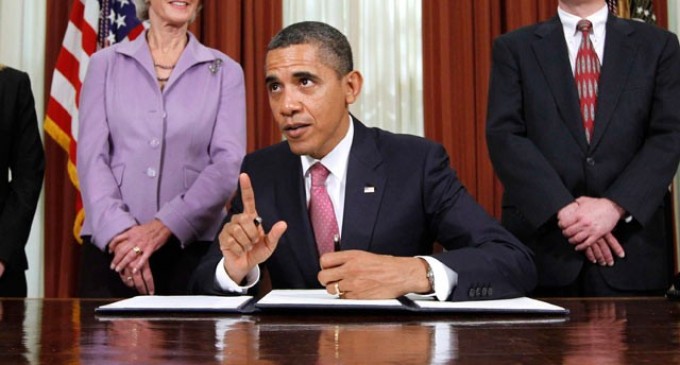 Obama has stated that he won't wait for Congress to act as they will be too busy this year, he will simply order things to be done, essentially, continuing his role as dictator.

The decent of America into despotism continues…

“The greatest tyrannies are always perpetrated in the name of the noblest causes.” Thomas Paine

WASHINGTON (CBS DC/AP) — President Barack Obama predicts Congress will be busy this year debating a renewal of jobless benefits for the long-term unemployed and an immigration overhaul. But he says he wants his Cabinet also to focus on executive actions that don’t require legislation.

“We are not just going to be waiting for legislation in order to make sure that we are providing Americans the kind of help that they need. I’ve got a pen and I’ve got a phone,” Obama said.

Obama stated he wants to “advance a mission” in an effort to unify all Americans.

“One of the things that I’m going to be talking to my Cabinet about is how do we use all the tools available to us, not just legislation, in order to advance a mission that I think unifies all Americans,” Obama said. “The belief that everybody’s got to take responsibility, everybody’s got to work hard, but if you do, that you can support a family and meet the kinds of obligations that you have to yourself and your family, but also to your communities and your neighbors.”

He says he is “very pleased” that Congress has agreed on a $1 trillion budget measure and urges lawmakers to pass it promptly.

Obama made his remarks at the top of a meeting with his Cabinet secretaries, two weeks before he delivers an economy-focused State of the Union address. The meeting was part of a week devoted to the economy, including a trip to North Carolina Wednesday to promote a manufacturing innovation hub and a meeting Thursday with college presidents to discuss worker training.