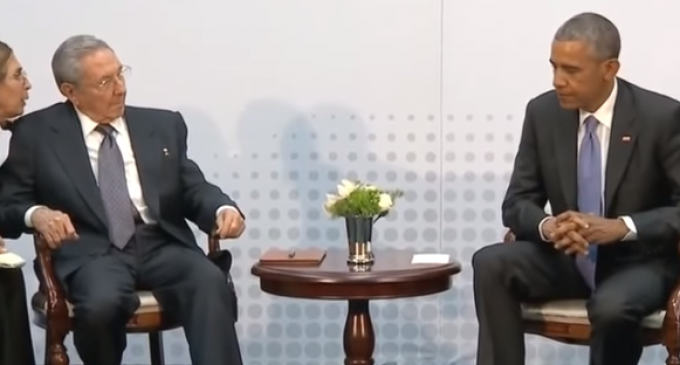 In a move that will surprise only the most politically unaware, President Obama has had sympathetic remarks to offer for criticism of the the US by our enemies.

Making what is the first trip by an American president to Cuba in over 50 years, Obama arrived in Havana before meeting privately with dictator Raul Castro. Per Obama's own admission, the two had what he described as a “frank and candid” discussion.

Although one would have expected the president of the United States to directly challenge Castro about his and his brother Fidel's tyrannical policies and appalling human rights records, Obama instead was happy to report that Castro was the one making criticisms – of America's human rights records.

No really, Raul Castro, brother and successor of Marxist dictator Fidel Castro, and a brutal autocrat in his own right, said that the US has a problem with human rights.

As if that weren't incredible enough, the president thinks he has a point.

Like the leftist that he is, Castro brought up America's troubled racial history and current economic troubles as proof that the country was an oppressive state morally equivalent to his and his brother's communist police state. An assessment that Obama seems to have swallowed hook, line and sinker:

“'President Castro has also addressed what he views as shortcomings in the United States around basic needs for people in poverty and inequality and race relations and we welcome that constructive dialogue as well,' Obama says. ‘Because we believe that when we share our deepest beliefs and ideas with an attitude of mutual respect that we can both learn and make the lives of our people better.'

Obama described the meeting with Castro earlier today as a ‘frank and candid' particularly on issues of human rights, but suggested that America has its own problems as well.

‘I actually welcome President Castro commenting on some of the areas where he feels we’re falling short because I think we should not be immune or afraid of criticism or discussion as well,' he said.”