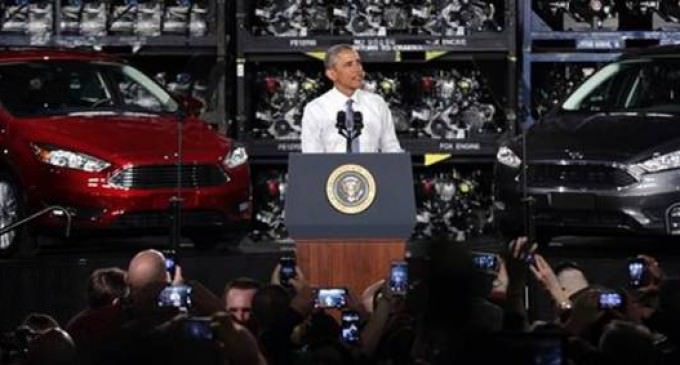 While all were focused on the killings in Paris by Muslim militants yesterday, President Obama delivered a speech in Wayne, Michigan touting his ‘rescue’ of the U.S. auto industry.

However, Obama picked a very strange place to host gloat over his ‘success’: a Ford Assembly Plant that was closed this week because of lack of sales of the small cars and hybrids that the plant manufactures (2014 sales of the Ford Focus was down 6% and the C-Max hybrid was down 22%)

Of course, he failed to mention that, according to a U.S. Treasury report, taxpayers lost $9 billion on the bailout and Detroit has filed the largest-ever municipal bankruptcy in U.S. history.

In his speech to an enthusiastic crowd at the assembly plant, Obama asserted America’s “resurgence is real – don’t let anybody tell you otherwise,” echoing his 2012 campaign mantra that “Osama Bin Laden is dead, but General Motors is alive and well.”

In a speech regarded as a warm-up for the economic-success narrative Obama is expected to tout during his upcoming State of the Union speech, he took credit for what he claimed is a strong and continuing recovery.

“Since 2010, we, America, have put more people back to work than Europe, Japan and every other advanced economy combined,” Obama claimed. “After a decade of decline, American manufacturing is in its best stretch of job growth since the 1990s. Here in Michigan, manufacturers have created more than 100,000 jobs, helping to cut your unemployment rate in half.”

Obama, in his speech, neglected to note Ford did not join GM and Chrysler in the bankruptcy proceedings his administration managed in 2009, though Ford did benefit from a $5.9 billion low-cost government loan used to overhaul its factories and to re-engineer more fuel-efficient technology.

Obama also neglected to cite a U.S. Treasury report released in December documenting the U.S. taxpayer lost $9.26 billion on the auto bailout, recovering only $70.43 billion of the $79.69 billion it doled out to GM and Chrysler.

Also challenging the Obama administration narrative, the city of Detroit emerged in December with the largest-ever municipal bankruptcy in U.S. history, requiring the city to slash $7 billion in debt and to reinvest $1.4 billion over 10 years to improve city services.

In 1950, Detroit, with a population of almost 2 million, was the fifth largest city in the United States. Today, some 55 years later, 1.3 million people have abandoned the city as the auto industry “has crumbled,” leaving the downtown area “a tiny urban island surrounded by empty lots,” as described recently by the Daily Mail of London.

As noted by the International Business Times, Detroit’s unemployment rate is one of the highest for any sizable U.S. city, presently at 8.1 percent, well above the national jobless rate of 5.8 percent.

“Over the past six years, hard-working, middle-class families have been squeezed by the president’s failed economic policies,” noted the Republican-controlled Senate Finance Committee in a fact sheet released Tuesday as Obama was flying to Michigan to deliver the speech. “Bigger government, higher taxes and more spending has saddled the American people with record high debt and left them with fewer jobs and smaller paychecks.”

The U.S. debt at the same time has increased $8.6 trillion under the Obama administration, from $10.6 trillion when Obama took office to more than $18 trillion today.