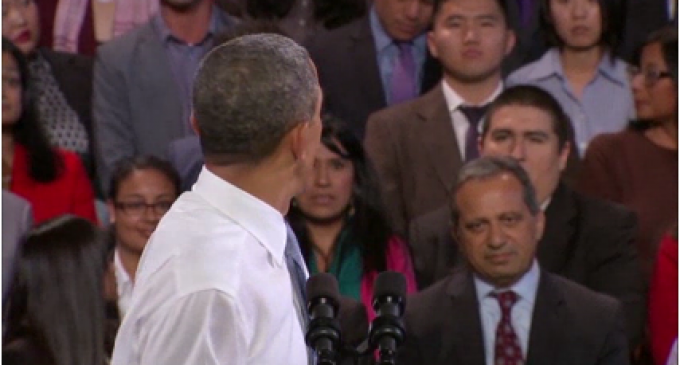 Obama addresses a heckler who was yelling “You have a power to stop deportations for all” by stating that he must obey the laws of the land and work through congress on immigration.

I don’t know which is the bigger offense, this guy demanding the president become even more of a tyrant, or Obama stating that he must obey laws after having committed an astounding amount of crimes!

After being heckled Monday while delivering a speech on immigration reform in San Francisco, President Obama said he would solve the issue without going through Congress, if only he could.

“I need your help,” a young man standing a few rows behind the president shouted. “You have a power to stop deportations for all.”

Some in the audience chanted with him, “Stop deportation. Yes we can.”

Obama told security to let the young man stay, then responded to the outburst.

“I respect the passion of these young people because they feel deeply about the concerns for their families,” Obama said. “Now what you need to know, when I’m speaking as president of the United States, and I come to this community, is that if in fact I could solve all these problems without passing laws in Congress, then I would do so.”

“But we’re also a nation of laws, that’s part of our tradition. And so, the easy way out is to try to yell and pretend that I can do something by violating our laws. What I’m proposing is the harder path, which is to use our democratic processes to achieve the same goal that you want to achieve. But it won’t be as easy as just shouting.”