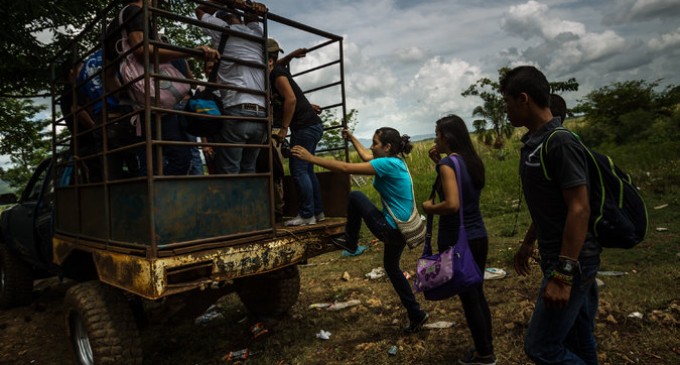 Obama wants to fly illegals directly into the country – starting in Honduras.

He would, by executive action, screen the illegals in their country and fly them directly into the US by labeling them as refugees.

Hoping to stem the recent surge of migrants at the Southwest border, the Obama administration is considering whether to allow hundreds of minors and young adults from Honduras into the United States without making the dangerous trek through Mexico, according to a draft of the proposal.

If approved, the plan would direct the government to screen thousands of children and youths in Honduras to see if they can enter the United States as refugees or on emergency humanitarian grounds. It would be the first American refugee effort in a nation reachable by land to the United States, the White House said, putting the violence in Honduras on the level of humanitarian emergencies in Haiti and Vietnam, where such programs have been conducted in the past amid war and major crises.

Critics of the plan were quick to pounce, saying it appeared to redefine the legal definition of a refugee and would only increase the flow of migration to the United States. Administration officials said they believed the plan could be enacted through executive action, without congressional approval, as long as it did not increase the total number of refugees coming into the country.

By moving decisions on refugee claims to Honduras, the plan aims to slow the rush of minors crossing into the United States illegally from El Salvador, Honduras and Guatemala, which has overwhelmed the border this year. More than 45,000 unaccompanied minors from those three nations have arrived since Oct. 1, straining federal resources to the point that some agencies will exhaust their budgets by next month, the secretary of Homeland Security has said.

Many of the children, particularly in Honduras, are believed to be fleeing dangerous street gangs, which forcibly recruit members and extort home and business owners. The United Nations estimates that 70,000 gang members operate in the three nations.

Administration officials stressed that no decision had been made to move forward, saying the idea was one of many being discussed by officials at the White House and the Departments of State, Homeland Security, Justice, and Health and Human Services.

Among the factors surrounding the decision are how many people in Honduras would be eligible to apply for the program, and how many would probably be approved.

The proposal, prepared by several federal agencies, says the pilot program under consideration would cost up to $47 million over two years, assuming 5,000 applied and about 1,750 people were accepted. If successful, it would be adopted in Guatemala and El Salvador as well.

It is unclear how the administration determined those estimates, given that since Oct. 1 more than 16,500 unaccompanied children traveled to the United States from Honduras alone.

Children would be interviewed by American immigration employees trained to deal with minors, and a resettlement center would be set up in the Honduran capital, Tegucigalpa, with assistance from international organizations like the International Organization for Migration.

The plan would be similar to a recent bill introduced by Senators John McCain and Jeff Flake of Arizona, who proposed increasing the number of refugee visas to the three Central American countries by 5,000 each.

According to the draft, the administration is considering opening the program to people under 21. It also suggested offering entry on emergency humanitarian grounds — known as humanitarian parole — to some of the applicants who did not qualify for refugee status.