Don’t you just love it when rich, limousine liberals lecture and rant to everyone about ‘income inequality’? At a recent speech in South Africa, Barack Obama attacked for their big houses before returning to his $8 million dollar eight-bedroom, nine-and-a-half bathroom mansion in one of the wealthiest neighborhoods in the world. The Obamas are also in the middle of installing an in-ground swimming pool and another terrace to the house, according to reports. The mansion is Obama’s second home.

“We’re going to have to worry about economics if we want to get democracy back on track,” Obama continued “We’re going to have to consider new ways of thinking about these problems, like a universal income, review of our workweek, how we retrain our young people, how we make everybody an entrepreneur at some level.”
So Obama is preparing to give away his wealth? Don’t hold your breath…just your wallet. 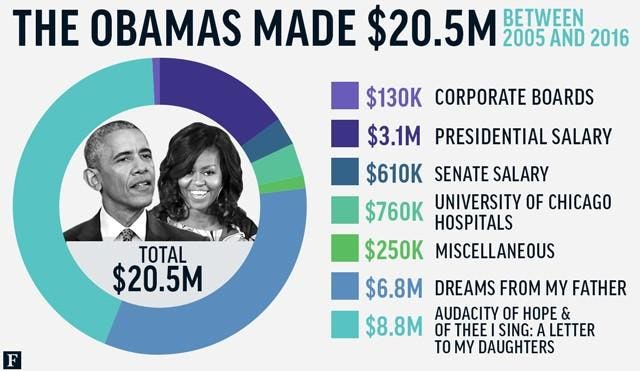 Three-fourths of that money came from lucrative book deals, according to a FORBES analysis of 16 years of tax returns and financial disclosure documents. In total, Obama has earned $15.6 million as an author since arriving in Washington.

He has made $8.8 million from his bestseller Audacity of Hope and children’s book Of Thee I Sing: A Letter To My Daughters. Sales of his memoir Dreams From My Father, originally published in 1995, also took off once he landed in the nation’s capital, resulting in a $6.8 million windfall for the president. Obama made another $3.7 million from government salaries. 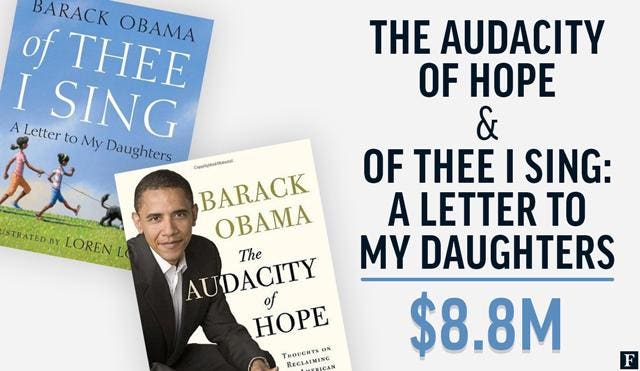 The former president didn’t waste much time capitalizing on his story once he got to the nation’s capital. In January 2005, the same month he joined the Senate, he got approval from its ethics committee for a $1.9 million advance against royalties with Random House for two non-fiction books and one children’s book.

Embracing The Path: My Journey To Higher Education

Then came the big money. In the two weeks before he was inaugurated as the 44th president, Obama reworked his book deals. He agreed not to publish another non-fiction book during his time in office, while signing a $500,000 advance for a young adult version of Dreams From My Father. He also finished the manuscript for Of Thee I Sing: A Letter To My Daughters, which was eventually published in November 2010. He donated all post-tax profits from the children’s book to provide scholarships for children of wounded and fallen soldiers. 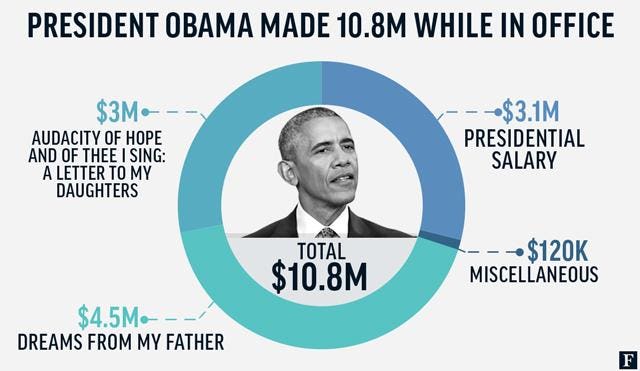 Over the next eight years, the Obamas made $10.8 million. Obama reported earnings of $3.1 million before taxes from his presidential salary (averaging $392,000 a year). Roughly $120,000 came from interest and dividends on investment holdings, which included U.S. treasury bills and an array of diversified funds.