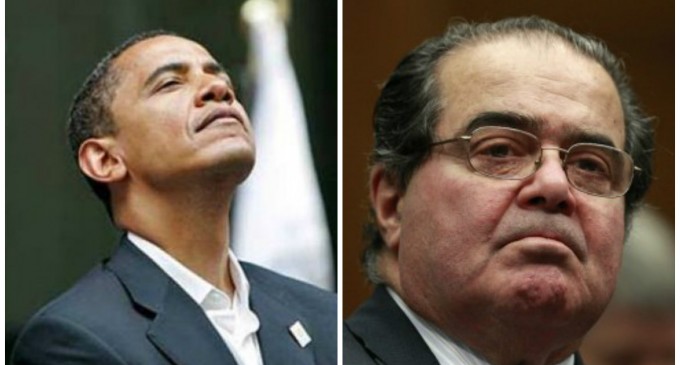 Supreme Court Justice Antonin Scalia was one of the most brilliant jurists to ever sit on the bench. He was selected by President Ronald Reagan in 1986, and confirmed by the Senate on a vote of 98 -0. His opinions were masterworks of commonsense, solid legal reasoning, with a strict adherence to constitutional limitations and content. He was definitely NOT one who would find new meanings in the venerable document where they were clearly spelled out or intended by the authors, a fact which often angered liberals who believe in a “living,” malleable guide. He was clear that jurists are not legislators, and the Constitution means what it says, nothing more and nothing less.

Now that Justice Scalia has died, there is an uproar over several pieces of business. The first, of course, comes from conspiracy theorists who find the way that Scalia died, and some of the unfinished work that was to come before the court, combine to make his untimely death more than a little suspicious.

The fact that he was on a remote ranch without his security detail is odd. The way he was found, in unrumpled bedclothes and a pillow over his face or head (the story keeps changing) is another question mark. But the fact that the court was getting ready to decide on two major cases, one regarding a signature Obama and EPA program that would have decimated coal mining and carbon businesses, and the other that would have allowed California school teachers to work without being members of the powerful teacher labor unions, is truly a serious problem.

In both cases, it appeared that the left would lose in court, and there is no doubt that environmentalists and union leaders have shown themselves in the past to be willing to break the law and more in order to force their will upon the people. Justice Scalia stood in the way and had already shown his view on the two cases, and so there are many who see this as nothing less than a case of murder for gain. This will be debated over the next few weeks, that is certain.

And then there is the very interesting response by president Obama to Scalia’s death.