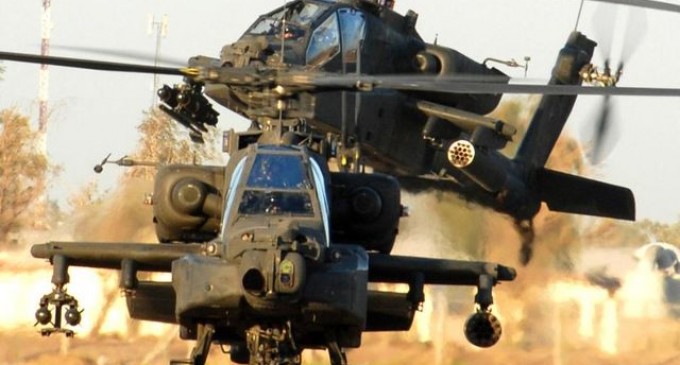 Obama has ordered the Defense Department to confiscate 192 Apaches from National Guard units around the country and give them to the active duty Army – replacing them with transport helicopters.

You remember Obama's promise to raise an army to protect the homeland that's just as powerful as the military? Yea, that didn't include the National Guard.

Apparently these weapons are just too powerful for the National Guard to have. In exchange for the heavily armed and highly maneuverable Apaches, the Guard will receive 111 UH-60 Blackhawk transport helicopters from the Army.

So the administration has purchased 2 billion rounds of ammunition through DHS, has been placing tanks and other war machines into the hands of local law enforcement all over the country, enacted draconian laws like NDAA that strips us of our Constitutional rights, spying on Americans by any means possible, crazy gun control laws are being passed, conservative groups attacked by the IRS and members being declared terrorists…do I have keep going? Is it not obvious where we are headed??

The National Guard is following a direct order — but it’s not happy with it.

All of the Guard’s AH-64 Apache helicopters are scheduled to go to the active Army, and there’s nothing its top brass can do about it.

“None of us like what we’re having to do,” National Guard Chief Gen. Frank Grass told members of the Senate Armed Services Committee on Tuesday, the military website Defense One reported. “My big concern right now is figuring out how I’m going to move, and how many states I’m going to have an impact on, and what’s the cost of facilities and to retrain pilots. I’ve got to tackle that because the decision’s been made.”

“These are very difficult decisions and there will be more difficult ones yet to come,” she said. “His focus now is to determine the impacts and how best to implement the decision.”

Army Chief of Staff Gen. Ray Odierno told members of Congress on Tuesday that the move will save $12 billion through fiscal year 2017, Defense One reported.

When the logistics are worked out, the Army’s fleet of OH-58 Kiowa helicopters will be divested, its newly acquired Apaches will fill its reconnaissance and scouting needs, and the National Guard will be given UH-60 Black Hawks.

Advocates of the Army’s decision say that the Black Hawks actually benefit the Guard because they are an incredible asset for disaster relief efforts.