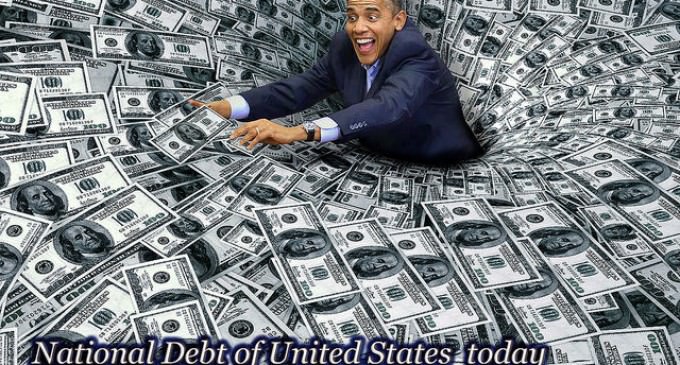 It's official, Obama has accumulated more in deficits than all other Presidents in U.S. history combined!

Although Obama is quick to point out that he has trimmed down the $1.4 trillion budget gap Bush left him –  the 2014 projection shortfall is $506 billion and the 2015 number is $469 billion – when you look at his socialist programs, like Obamacare, that are coming online, that improvement will be lost after only one year.

Per www.whitehouse.gov, the accumulative total for all US Deficits combined was $11.6 Trillion through the end of 2014 (see Table 1.1—SUMMARY OF RECEIPTS, OUTLAYS, AND SURPLUSES OR DEFICITS (–):

1789–2020).  This $11.6 Trillion along with accumulated interest payables are what account for the $13 Trillion in US debt outstanding.

A closer look at the deficits recorded at www.whitehouse.gov shows that the Obama Administration has accumulated more in deficits in six years than all prior years combined!

At the end of 2008, the accumulated total of all US Deficits for all administrations since 1789 was $5.3 Trillion. For the six years 2009 through 2014, the Obama Administration has racked up an impressive $6.3 Trillion in deficits which are now more than all of the accumulated deficits before he took office.

The GW Bush Administration racked up $2.0 Trillion in deficits in the 8 years it held the realm (2001 – 2008).  The highest annual deficit the Bush administration amassed over its eight years was a $459 Billion deficit in 2008, a record at that time.  This is far less than each of the Obama years.  The Obama

administration holds the record for the top six annual budget deficits all accumulated in its first six years, with more than $1 Trillion deficits in each of its first four years alone.

There are people that say the Obama Administration is not to blame.  Proponents of the current administration argue that because the US fiscal year ends in September, the $1 Trillion ‘Stimulus’ bill passed by Democrats and signed by the Obama administration in early 2009 should be associated with the Bush administration.  This is clearly nonsense since it was passed after Obama was sworn in and Bush was long gone.

Alternatively, most of the TARP funds created in 2008 to ‘stabilize’ the economy and loaned by the Federal government to banks, auto companies and government entities FNMA and Freddie Mac were repaid by these entities in years after 2008 when the first loans were made. The bailout money loaned was $614 Billion and the government receipts to date from these loans are $667 Billion.  The Obama administration has benefited from the payoff of these one-off loans since 2009, and would have reported even higher deficit spending over the past six years without these inflows.

Without a doubt and as clearly shown on its own White House website, Obama is king and world record holder of US deficits.