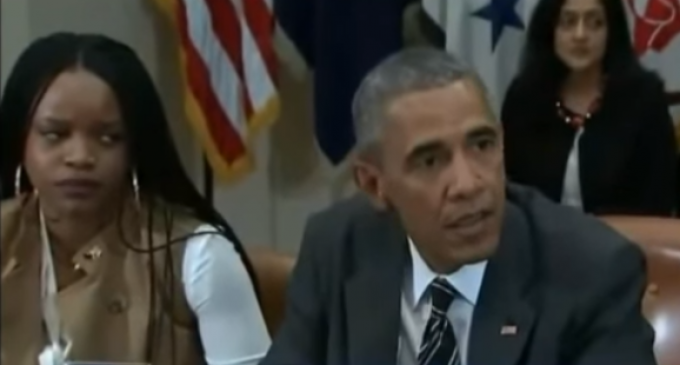 Barack Obama promised to be a uniter of the nation and suggested that as an African American he would be able to help bridge the gap between races. He has proven to be anything but that. In fact, race relations have gotten decidedly worse since the start of his presidency, and he has certainly been a part of that problem. The activist community wants to blame every negative encounter with police on discrimination, and Obama has repeatedly promoted that. When black Harvard professor Henry Louis Gates tried to break into his own home because the door was jammed and a neighbor called 911 to report a burglary, the police responded and the professor became incensed and combative when they showed up rather than calmly explain the situation and ask for help. Obama weighed in on the situation and criticized the police and called them stupid, while justifying the professors angry response.

When Treyvon Martin was accosted by neighborhood watchman George Zimmerman as he walked through a dark, rainy residential area one night that had reported a number of burglaries, and the encounter ended up in a fight, there were clearly different sides to the story. Zimmerman ended up with a bloody head and broken nose. He had a gun, and he shot and killed Martin in what he claimed was self defense. There was plenty of room for debate on what actually happened that night, but Obama and the Justice Department immediately jumped in and crucified Zimmerman in the media and used the Justice Department to take sides rather than let the local police and justice system sort the matter out. A jury later determined that Zimmerman had, in fact, been justified in his response.

When Michael Brown, a black 18 year old man robbed a liquor store and assaulted the clerk, all of which was caught on camera, and then a short time later had an altercation with a police officer, once again Obama was taking the side of the black youth and denigrating the police officer. Brown reached into the car of the officer and assaulted him and tried to take his gun away, which resulted in a shot being fired in the car. The altercation then continued outside of the car and Brown was then was shot and killed by the officer, who said he feared for his life. The city of Ferguson, Missouri where the incident took place experienced rioting and looting for several days by African Americans who claimed the incident was murder and that Brown was killed due to racism and police brutality. Obama once again took sides and suggested that the rioting and looting, which destroyed many businesses in the city, were somehow justified and understandable.

Out of the incident in Ferguson, the nascent Black Lives Matter movement was born. It is organizationally founded on the idea that racism against blacks is widespread, police discrimination against blacks is institutional, physical restraint and violence is commonplace by police against blacks, and incarceration rates of blacks is unjust, unfair, and unbalanced. All of the claims are disputable at best, but Barack Obama, representative of, and alibi maker for the protesters, is once again taking sides and even praising these trouble makers for their claims and activism.  Watch the video on page 2 to hear Obama lauding these law breakers and praising their activities.