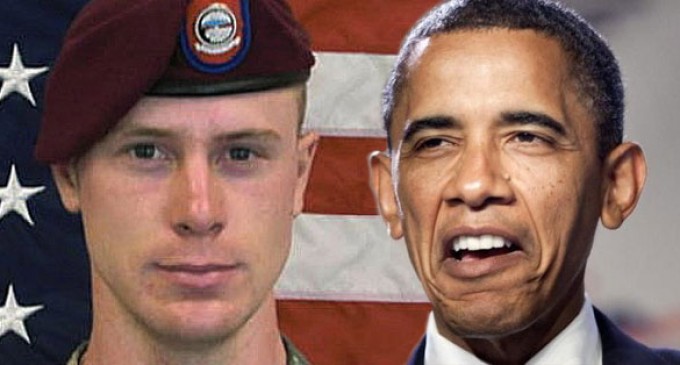 Was President Obama planning the Bergdahl ‘prisoner' swap with the Taliban for years? It looks like the suspected deserter and those soldiers eventually sent in attempts to retrieve him were treated as disposable pawns in Obama's long-term ploy to appease the Taliban and get back at Congress.

One of President Obama's first acts after he took office was to order the shutdown of Gitmo, but he was thwarted in this effort by Congress. Now evidence indicates he passed up chances to rescue Bowe Bergdahl because he felt a Taliban prisoner swap would help to close the Guantanamo Bay detention facility.

According to this report from The Daily Mail, the Bergdahl fiasco, including the deaths of soldiers sent to extract the deserter, were the result of Obama's reaction to being blocked by Congress. If this is true, then the White House excuse that the President knowingly violated federal law by releasing prisoners without notifying Congress is pure fantasy. He has been planning the move for years in order to achieve his goal outside the law.

The Obama administration passed up multiple opportunities to rescue Sgt. Bowe Bergdahl because the president was dead-set on finding a reason to begin emptying Guantanamo Bay, Cuba, according to a Pentagon official.

‘JSOC went to the White House with several specific rescue-op scenarios,’ the official with knowledge of interagency negotiations underway since at least November 2013 told MailOnline, referring to the Joint Special Operations Command. ‘But no one ever got traction.’

‘What we learned along the way was that the president wanted a diplomatic scenario that would establish a precedent for repatriating detainees from Gitmo,’ he said.

The official said a State Department liaison described the lay of the land to him in February, shortly after the Taliban sent the U.S. government a month-old video of Bergdahl in January, looking sickly and haggard, in an effort to create a sense of urgency about his health and effect a quick prisoner trade.

‘He basically told me that no matter what JSOC put on the table, it was never going to fly because the president isn’t going to leave office with Gitmo intact, and this was the best opportunity to see that through.’