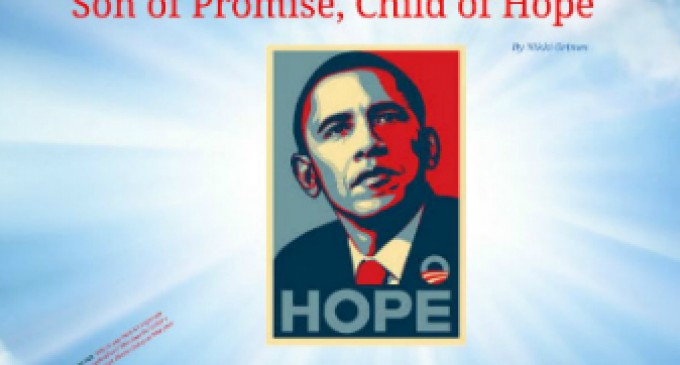 In one passage, a young Obama sees beggars and wonders to himself, “Will I ever be able to help people like these?”

Other passages paint him as being altruistic and pure of heart in intent:

“He worked as hard as a farmer, planting the words ‘Yes, we can!’ like seeds in spring.

“Impatient, Barack kept wondering if those seeds would ever sprout. He worried that the hope in him would fade away.”

This is beyond sick. Instead of teaching youngsters to be critical thinkers and question those that hold the reigns of power, it teaches them to revere Obama like some sort of messiah.

On the heels of a controversial children’s book about Barack Obama – which stated “white voters would never vote for a black president” and that “Barack’s former pastor” said “God would damn the United States for mistreating its black citizens” – comes a new lesson that casts America’s 44th president in a messianic light. Literally.

The lesson plan and accompanying visual presentation were authored by Sherece Bennett, and is for sale on TeachersPayTeachers.com. It’s all based on a book titled, “Barack Obama: Son of Promise, Child of Hope,” by Nikki Grimes.

In one passage, a young Obama sees beggars and wonders, “Will I ever be able to help people like these?”

“Hope hung deep inside of him,” the book adds.

Another excerpt from the book reads: “Before dawn each morning, Barry rose – his mother’s voice driving him from dream land. ‘Time for learning English grammar and the Golden Rule. Be honest, be kind, be fair,’ she taught him.”

The story continues: “One morning, he slipped on the name he’d been born with. The name of his father, Barack. For the first time in his life, he wore it proudly – like a coat of many colors.”

Uh oh – another Obama-inspired Biblical reference in a government school! But there’s no controversy here. Leftists will use God and the Bible, in instances such as these, when it appropriately fits their propaganda purposes.

No story about Barack Obama would be complete without mentioning his work as a community organizer. The book describes those days in dramatic fashion:

“The work was grueling, with stretches of failure, and puny patches of success. Door-to-door Barack went, early mornings, late nights, pleading and preaching, coaxing strangers to march together, to make life better for everyone.

“He worked as hard as a farmer, planting the words ‘Yes, we can!’ like seeds in spring.

“Impatient, Barack kept wondering if those seeds would ever sprout. He worried that the hope in him would fade away.”

This mythical interpretation of Obama was the #1 New York Times bestselling picture-book biography of Obama, according to Amazon.com.

Bennett’s lesson calls for students as young as third grade to read Grimes’ book and do a number of activities, including making a collage of Obama:

Grimes’ book and Bennett’s lesson plan are more fitting for an authoritarian regime in which children are taught to deify and praise their dear leader. One can almost envision teachers in Cuba, Venezuela and Iran using similar books and lessons.

Thankfully, that’s not the American way, which makes these learning materials completely unsuitable for our classrooms.

Still, given the large number of activist teachers in the U.S., there’s a very real possibility this is the version of Barack Obama’s history many of our young students are learning in a school near you.