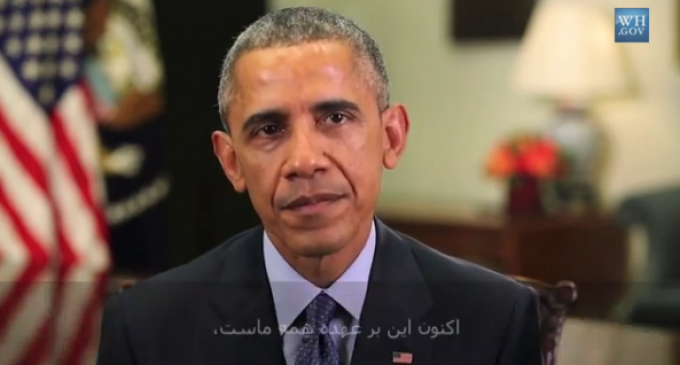 In a recent speech to the Iranian people celebrating Nowruz, the Persian New Year, President Obama stated that: “Iran’s supreme leader, Ayatollah Khameini, has issued a fatwa against the development of nuclear weapons.”

This was a complete fabrication. There is no such fatwa and Obama has lied about its existence on more than one occasion.

Last week, at a joint news conference with German Chancellor Angela Merkel, Obama said that it was time for Iran to reach a decision on “a deal that allows them to have peaceful nuclear power but gives us the absolute assurance that is verifiable that they are not pursuing a nuclear weapon.” He added that “if in fact what they claim is true, which is they have no aspiration to get a nuclear weapon, that in fact, according to their Supreme Leader [Ayatollah Ali Khamenei], it would be contrary to their faith to obtain a nuclear weapon, if that is true, there should be the possibility of getting a deal.”

Obama was referring to a purported fatwa by Khamenei, declaring nuclear weapons to be “haram,” religiously forbidden under Islamic law. In fact, the president has mentioned the fatwa several times in the past few years, including in his September 2013 speech to the United Nations, for good reason. It is helpful for the U.S. government to point this out since, by the words of its own leader, it would be hypocritical for Iran to push ahead with weapons development.

There’s just one small problem: The fatwa may not exist at all. Although Iranian officials have referred to it repeatedly, it has not been published. By contrast, all of Khamenei’s other fatwas have been. Moreover, Iran has given conflicting dates for its issue, including 2003, 2004, 2005 and 2012.

The nearest thing to an official text can be found on the web page of Iran’s Permanent Mission to the United Nations. This version, dated Feb. 19, 2012, declares that “The Iranian nation has never pursued and will never pursue nuclear weapons. There is no doubt that the decision makers in the countries opposing us know well that Iran is not after nuclear weapons, because the Islamic Republic, logically, religiously and theoretically, considers the possession of nuclear weapons a grave sin and believes the proliferation of such weapons is senseless, destructive and dangerous.”

That’s all well and good, but it is not exactly a fatwa. It makes no reference to the Quran or any other Islamic text or tradition, as other religious edicts traditionally do. It reads more like a statement of government policy, and as such, can be changed with the circumstances. In fact, even genuine fatwas can be amended and changed by circumstances.