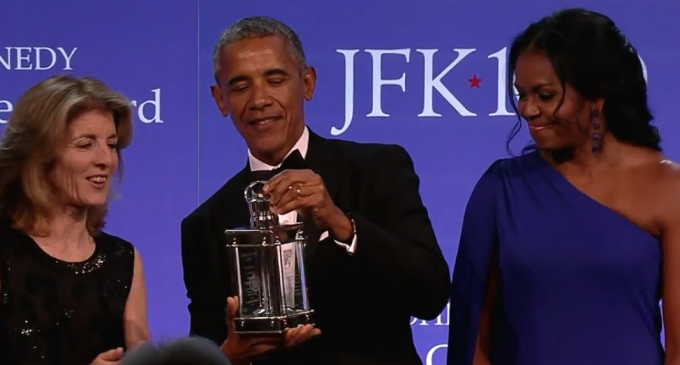 Another day, another award…

Former president Barack Hussein Obama was in Boston on Sunday to accept a mutual Liberal admiration trophy called the John F. Kennedy Profile in Courage Award, one which is given 90% of the time to Liberal Democrats, but has on a couple of occasions, been awarded to RINOs and Establishment Republicans.  John McCain, himself, was a recipient of this award in 1999, presumably for being a “maverick” and voting against his own party on many occasions (Liberals just love that…until that “maverick” runs for president, then all bets are off).

At the ceremony, Obama praised Democrats that passed the massive Obamacare bill, calling them courageous.

“These men and women did the right thing, they did the hard thing,” Obama said. “Theirs was a profile in courage. Because of that vote, 20 million people got health insurance who didn’t have it, and most of [those lawmakers] did lose their seats.”
Obama said the debate is not settled, adding it is his “fervent hope … that regardless of party, such courage is still possible.”

That statement begs the question:  What makes this vote courageous?  According to every Democrat at the time of that vote, there was not a single American that was against the Unaffordable Careless Act.  If lawmakers were voting for a very popular bill, what would be courageous (or for that matter, career-killing) about that?  I mean, isn't that what the constituents put you there for in the first place.
The audience for this awards ceremony pays good money to see these types of fake pomp and circumstance, and Obama is now bound by the Progressive code of showing his face at these events so that they can justify the $50K a seat price tag.
Former president Obama's newest endeavor involves a flight across the Atlantic to the land of the olive and the Christians thrown to the lions (that latter description particularly enticing to the former president, I'm sure).
Yes, Obama is traveling to Italy and has a specific agenda in mind.  This one is chicken soup for the Liberal soul and offers the very best in mainstream media coverage.  CNN, MSNBC, CBS, ABC, Time, Newsweek, NYT and the Posts (Washington and Huffington) await with bated breath as the former savior dons his cape and mask and attempts to, once again, turn back the tides of the rising seas.