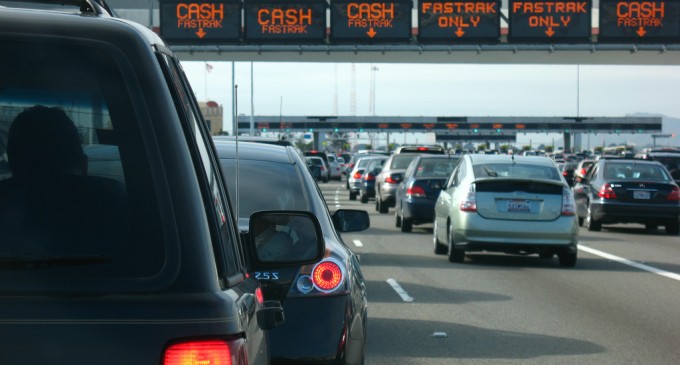 Obama’s transportation reauthorization bill, which was released last week, is his latest scheme to tax and track you.

Federal law prohibits the conversion of freeways into toll roads, but what's the law to Obama?

Not only would we have to pay to use our interstates which have been free for 60 years, but rest assured this is as much an effort to track your movements on the highway as most will elect to utilize a card instead of constantly digging for change.

Need we ask what our wimpy, complicit Congress will do with this bill? No matter, Obama has a pen and a phone.

The White House is far from done with the promised “fundamental transformation” of society. Secret courts issue general warrants enabling the government to listen to every telephone call and read every email. Drones take to the skies to monitor everyone below, and still the administration is not satisfied. President Obama’s transportation reauthorization bill, released last week, would demolish one of the greatest American accomplishments of the 20th century in a way that will create one more opportunity to spy.

Since it was begun nearly 60 years ago, the interstate highway system has been a boon to commerce. Anyone with a car or truck and a few tanks of gasoline — whether a vacationing family in a station wagon or an 18-wheeler packed with goods — could travel from coast-to-coast on safe, high-speed roads, largely without a toll booth to collect coins thrown into a basket. That would all change under Mr. Obama’s latest scheme to eliminate the freedom of the open road. He would require everyone to have a toll transponder to register every Sunday drive and morning commute with the federal government.

Federal law currently prohibits the conversion of existing freeways into toll roads, though the rule has been bent over the past few years. Greedy bureaucrats, Republican and Democrat alike, have pushed pilot projects to create “Lexus lanes” that promise the wealthy a speedy journey in a taxpayer-funded lane, for a fee, without worrying about their progress impeded by working-class commuters. The District of Columbia, for instance, has revealed a plan to create Lexus lanes (or Cadillac channels) on the 14th Street Bridge and Interstate 295 as part of a scheme to raise $2 billion from Virginians and Marylanders. It’s the commuter tax the city has wanted for decades.

It’s a shakedown, pure and simple, but some conservatives are deluded by the notion that this is a “free market” idea because the government colludes with crony businesses in a “public-private partnership.” There’s nothing free about it.

The public has an occasional impulse to throw out the politicians who get carried away with tax increases. Politicians are a sneaky lot and have realized they can outsource the revenue increases to a private company. The public is powerless to vote out the foreign corporations given control of setting toll rates under toll-road leases that can last as long as 99 years.

In return for their service to politicians, the private companies pocket at least 22 percent of the revenue they collect. This is the cost of overhead for the expensive transponder-reading equipment, a billing department, customer service, lawyers and a host of busybodies required for operation. The interstate highways built under President Eisenhower have never needed marketing departments or advertising budgets.

When Congress takes up the transportation bill, it must not allow the president to undermine the interstates that are fundamental to America’s transportation system. The government is already intrusive and expensive without this highway robbery.