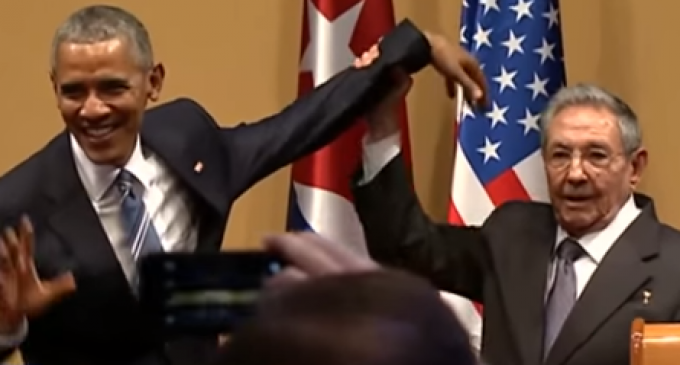 President Obama's recent trip to Cuba has been an insult to Americans everywhere. On Monday, he posed in front of a spray-painted image of Che Guevara, Cuba's famous revolutionary, as well as the image seen on many American t-shirts, and he paid his respects to a man whose life has racked up a comparable body count.

Every photograph and film taken was planned, and the worst part about it is the fact that it was President Obama who made a fool of himself, not the Cubans. That is, until our fearless leader took to the stage with Raúl Castro.

During his speech on human rights, he not only said that America can learn a few things from Cuba on human rights, he also let Raúl Castro lift his arm in the air and dangle it like a limp-wristed fairy after he apparently tried hugging the communist.

You can watch the video on the next page.