By unconstitutional executive order Obama started giving out  these work permits and ‘green cards’ after the Nov. 4 midterm elections.

According to the FBO website solicitation, U.S. Citizenship and Immigration Services the vendor will recieve an order for a minimum of 4 million cards per year for five years, with 9 million in the early stages. 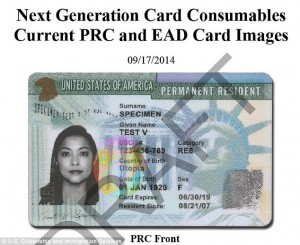 The agency is buying the materials need to construct both Permanent Residency Cards (PRC), commonly known as green cards, as well as Employment Authorization Documentation (EAD) cards which have been used to implement President Obama’s “Deferred Action for Childhood Arrivals” (DACA) program. The RFP does not specify how many of each type of card would be issued.

Jessica Vaughan, an immigration expert at the Center for Immigration Studies and former State Department official, said the document suggests a new program of remarkable breadth.

The RFP “seems to indicate that the president is contemplating an enormous executive action that is even more expansive than the plan that Congress rejected in the ‘Gang of Eight’ bill,” Vaughan said.

Last year, Vaughan reviewed the Gang of Eight’s provisions to estimate that it would have roughly doubled legal immigration. In the “surge” scenario of this RFP, even the relatively high four million cards per year would be more than doubled, meaning that even on its own terms, the agency is preparing for a huge uptick of 125 percent its normal annual output.

It’s not unheard of for federal agencies to plan for contingencies, but the request specifically explains that the surge is related to potential changes in immigration policy.

“The Contractor shall demonstrate the capability to support potential ‘surge’ in PRC and EAD card demand for up to 9M cards during the initial period of performance to support possible future immigration reform initiative requirements,” the document says.

A year ago, such a plan might have been attributed to a forthcoming immigration bill. Now, following the summer’s border crisis, the chances of such a new law are extremely low, giving additional credence to the possibility the move is in preparation for an executive amnesty by Obama.

Even four million combined green cards and EADs is a significant number, let alone the “surge” contemplated by USCIS. For instance, in the first two years after Obama unilaterally enacted DACA, about 600,000 people were approved by USCIS under the program. Statistics provided by USCIS on its website show that the entire agency had processed 862,000 total EADs in 2014 as of June.

Vaughan said EADs are increasingly coming under scrutiny as a tool used by the Obama administration to provide legalization for groups of illegal aliens short of full green card status.

In addition to providing government approval to work for illegal aliens, EADs also cost significantly less in fees to acquire, about $450 compared to more than $1000. In many states, EADs give aliens rights to social services and the ability to obtain drivers’ licenses.

Vaughan noted there are currently about 4.5 million individuals waiting for approval for the green cards having followed immigration law and obtained sponsorships from relatives in the U.S. or otherwise, less than the number of id cards contemplated by the USCIS “surge.”

USCIS officials did not provide additional information about the RFP by press time.