It was initially to be a meeting only on slowing the deportations of millions of illegal immigrants and the alteration of federal enforcement policies. Now officials are talking with big companies like Cisco, Intel and Facebook in hopes to add more changes gain their support.

I guess he who has Obama’s back will get and keep cheap labor?

Mr. Obama’s increasingly expansive appetite for the use of unilateral action on issues including immigration, tax policy and gay rights has emboldened activists and businesses to flock to the administration with their policy wish lists. It also has opened the president, already facing charges of executive overreach, to criticism that he is presiding over opaque policy-making, with the potential to reward political backers at the expense of other interests, including some on the losing side who are threatening to sue.

“We look at what they’ve been doing with executive action and are deeply concerned, and have focused a lot of our energies on how we can roll back these things,” said Geoff Burr, the vice president of federal affairs for Associated Builders and Contractors, whose member companies do 60 percent of federal construction jobs.

Mr. Burr said an executive order issued by Mr. Obama last month that would block companies with a history of workplace violations from receiving federal contracts had prompted his group to contemplate “the virtues of a litigation strategy.”

White House officials say Mr. Obama has been inclusive as he looks to wield his authority, reaching out to an array of lawmakers, experts and business leaders for a wide range of perspectives to inform his plans for executive actions. Since the president first announced his intention to use his “pen and phone” to advance his agenda during his State of the Union address in January, White House officials have held weekly meetings to compile ideas from inside and outside the administration.

In some cases, the public has gotten a glimpse of the process, such as during a summit meeting on working families in June. More often, though, the talks have occurred behind the scenes. Administration officials have convened more than 20 so-called listening sessions this summer alone on executive options for revising immigration policy, a White House official said, declining to discuss the sessions in detail because the conversations were private.

“The president has been clear that he will use all of the tools at his disposal, working with Congress where they are willing but also taking action on his own where they aren’t, to expand opportunity for all Americans and help more families share in our economy’s continued progress,” said Jennifer Friedman, a White House spokeswoman. “As part of this process, the administration has engaged a wide range of stakeholders and has solicited input from groups and individuals representing a diverse set of views.”

Activists and business groups that stand to gain from the moves are eagerly providing the White House with their side of the case.

“We’ve been talking to them about what we believe they can do while we wait for Congress to act,” said Scott Corley, a lobbyist for Compete America, a coalition of Silicon Valley companies seeking relief for foreign-born technology workers. “We’ve looked at where the legal authority exists, and we’ve found lots of ways in which the administration can move forward.”

The outreach is an effort to broaden the political support for Obama’s decision to go it alone on immigration — another sign that suggests the White House fears a backlash in November, particularly among independent voters in battleground Senate races where Republicans are seizing on the issue.

“The president has not made a decision regarding next steps, but he believes it’s important to understand and consider the full range of perspectives on potential solutions,” said White House spokesman Shawn Turner. “The meetings were in keeping with the president’s commitment to do whatever he can, within the constraints of the law, to address the immigration issue.”

Turner said the meetings with business leaders were among more than 20 “listening sessions” with outside groups.

“They are very seriously looking at a big variety of things to figure out what people think would be helpful,” a source in one of the meetings said, describing the meeting as a “productive listening session.”

Senior administration officials stepped up their engagement with companies and business groups over the past month as they look to produce a series of executive orders starting in September. Aides are asking industry executives for ideas and are trying to earn their support against an expected barrage from Republicans opposed to Obama taking any action. 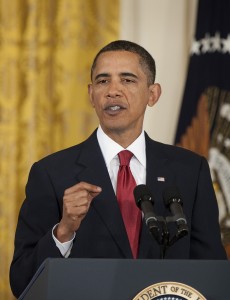