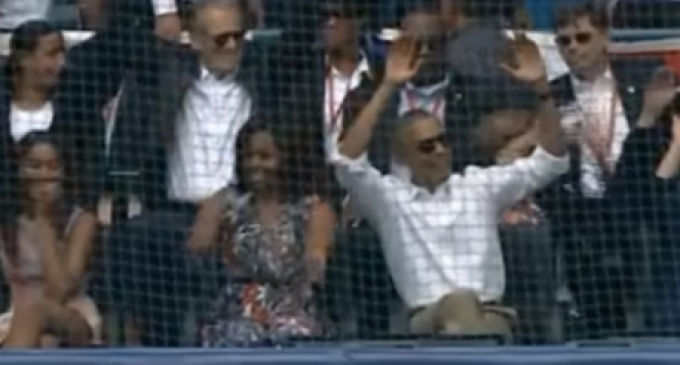 While Brussels is in the news after shocking terrorist attacks, the word on President Obama's mind is “baseball”.

Scratch that, the only words on his mind are “baseball” and “Castro”, as in Raul Castro, the current dictator of Cuba. Having taken over for the notorious Fidel, Castro had the dubious honor of meeting Obama in what is the first visit by a sitting president to the Caribbean island in half a century.

The president has been so enamored of the so-called “worker's paradise” the Castros built that he has paid comparatively little attention to certain more pressing matters, like the suicide bombings carried out by jihadists in the heart of Europe just yesterday.

As millions mourned the death of over 30 innocent civilians at the hands of the terrorists, Obama was taking in a “historic” baseball game in Havana. When he finally spoke about the attacks, he had precious little to say. Perhaps he was running late for a coffee date with Castro.

Watch Obama's response on the next page:

Despite the relentless barrage of press conferences, statements and photo ops the president has subjected the public to since he arrived in Cuba, Obama couldn't even bring himself to speak for more than a minute about the attacks in Brussels. How sad that the leader of the free world is trivializing not only tyranny, but terrorism as well.

See Obama's statement for yourself:

Listen to Obama's excuse for watching baseball as Brussels burned. Basically exemplifying his strategy on ISIS and terrorism: ignore it.