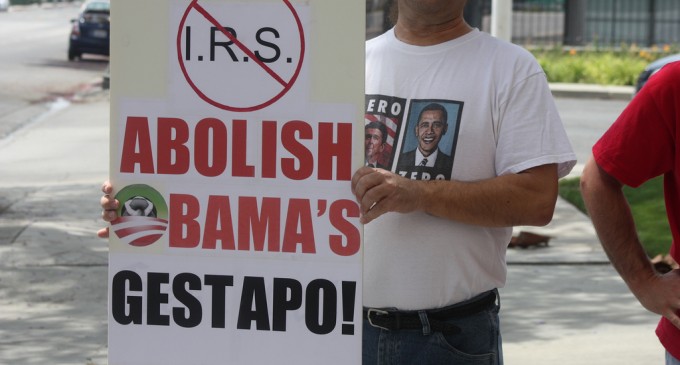 If you've wondered why the IRS Tea Party scandal hasn't gone anywhere here's your answer: it's headed by an Obama donor.

“By selecting a significant donor to President Obama to lead an investigation into inappropriate targeting of conservative groups, the Department has created a startling conflict of interest,” Issa and Congressman Jim Jordan (R-Ohio).

Conflict of interest? That's putting it lightly…it's more like one criminal covering for another.

Wonder why the U.S. Department of Justice’s purported criminal investigation into the Internal Revenue Service discrimination scandal, which involves the targeting of Tea Party nonprofit groups during the 2012 Presidential election season, doesn’t seem to be going anywhere?

It might have something to do with the fact that the DOJ picked attorney Barbara Kay Bosserman, a documented Barack Obama campaign donor, to lead the investigation.

Congressman Darrell Issa (R-Calif.), chairman of the House Oversight and Government Reform Committee, said Wednesday that the committee’s own investigation revealed that Attorney General Eric Holder had put Bosserman, who works in the department’s Civil Rights Division, in charge of the criminal probe, effectively stymieing any hope of an objective inquiry.

“By selecting a significant donor to President Obama to lead an investigation into inappropriate targeting of conservative groups, the Department has created a startling conflict of interest,” Issa and Congressman Jim Jordan (R-Ohio) wrote to Holder Wednesday in a call for Bosserman to be removed from the probe. “It is unbelievable that the Department would choose such an individual to examine the Federal government’s systematic targeting and harassment of organizations opposed to the President’s policies. At the very least, Ms. Bosserman’s involvement is highly inappropriate and has compromised the Administration’s investigation of the IRS.”

Bosserman donated more than $6,000, in total, to Obama’s two Presidential campaigns, and also made separate, smaller donations to the Democratic National Committee in 2004 and again in 2008.

According to The Washington Times, which first reported on the discovery, the DOJ’s justification for not vetting Bosserman’s political affiliations is that it would be a violation of her Constitutional rights.

“[T]he Justice Department said it isn’t allowed to consider a career lawyer’s political leanings when doling out assignments and that it would violate an employee’s constitutional rights if he were penalized on the job for making legal political contributions,” the Times’ Stephen Dinan wrote.

The IRS investigation has dragged on for eight months with no evident progress, save for periodic updates — mostly filled with criticisms of the DOJ’s languorous pacing — from the Oversight Committee’s Republican leadership.

The criminal investigation is reportedly a joint task shared by the DOJ and the FBI. In his Wednesday letter to Holder, Issa reiterated his previous assertion that the FBI’s continued, “blatant” stonewalling of the Oversight Committee’s ongoing requests for information amounts to criminal obstruction of a Congressional investigation.