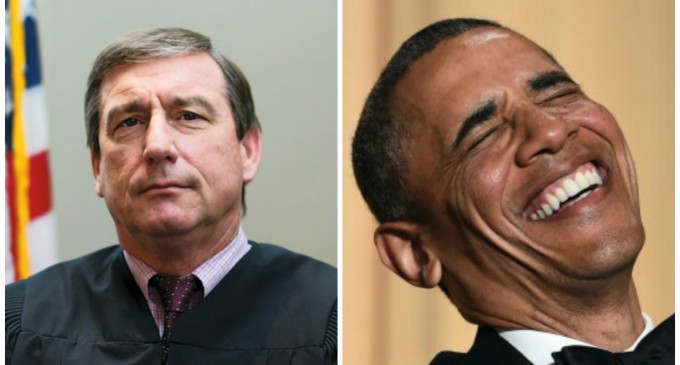 The pomposity of the Obama, who scribbles down presidential executive orders like they are simply personal reflections and then proceeds to condone the actions of his rogue Justice Department which has refused an order by a federal judge demonstrates just how unfit he is as the President of the United States.
Ignoring the Constitution, Obama penned his executive action on immigration and had his DHS implement and expand a program that let people, who immigrated illegally to the US when they were children, obtain work permits and “renewable two-year deferrals from deportation”.  This program was expanded to include the parents of these children, to get work permits and also making the two-year deferral into three-years.

In defiance of the injunction from Texas federal judge Andrew Hanen, Obama states he will go ahead with his amnesty plans for illegal immigrants, reported Truth and Action.

“We’re not going to be actually taking applications in until this case is settled,” Obama states on Tuesday. “But we are doing the preparatory work because this is a big piece of business,” he continued.

“The Department of Homeland Security will continue in the planning because we want to make sure as soon as these legal issues get resolved, which I anticipate they will in our favor, that we are ready to go,” Obama told reporters.

This is a clear violation of the judge’s injunction that clearly states that any and all preparations for amnesty must cease.

The Obama Justice Department lied to Judge Hanen when they promised him that the 2014 program would not be “implemented until February of 2015”, giving Hanen “time to evaluate the case”.  The government, of course, broke its word and began giving out deferrals in November of 2014.
Read the what Justice Hanen has done to the attorneys on this case on the next page.