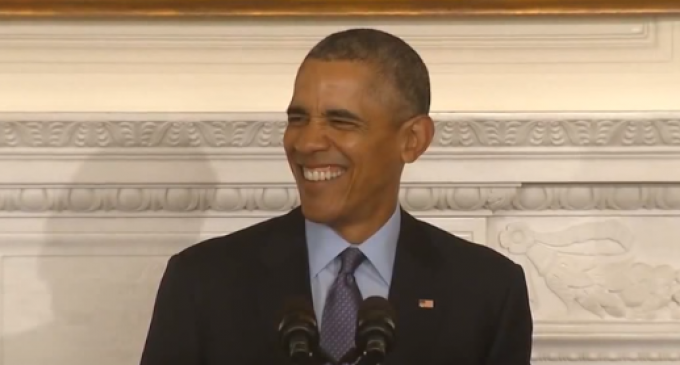 President Obama continues to cement his reputation as the most petty and thoroughly reprehensible individual to ever occupy in the White House.

When legendary Supreme Court Justice Antonin Scalia died, people looked to the president for his response. It was no secret that Scalia, the reliably conservative justice, and Obama, the hard-left community-organizer turned politico, had significant ideological disagreements, but it was at least expected that the president would attend his funeral.

At least, that's what decorum would dictate. But decorum is not something Obama likes to trouble himself with. Instead, he spent the weekend of the funeral strolling around the White House, carrying a list of potential nominees for the Supreme Court. The next day he went golfing, demonstrating that he did indeed have time that weekend to attend Scalia's funeral.

Now, adding insult to injury (literally), Obama cracked a joke about Scalia's passing before guffawing listeners, saying that he had one more year to do things like fix roads, educate children, and “[appoint] judges.”

So he had time to look for a replacement for Justice Scalia and mock him in death, but not to pay his respects to him?

Man, that's low even for him.