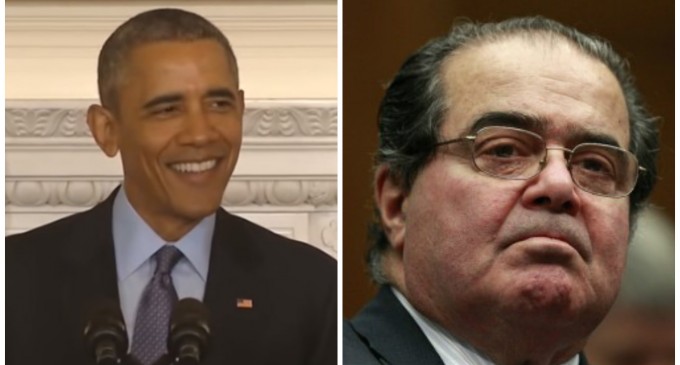 Everything surrounding the untimely death of Justice Antonin Scalia smells of a rat and President Obama's behavior in the aftermath only amplifies the suspicion that foul play and a cover-up has occurred.

Scalia was enjoying an hunting trip at Obama's long time donor and a Democrat party hack John Poindexter's ranch.  Poindexter's own words lead one to believe that an assignation did occur.

Poindexter said Scalia had an “enjoyable” evening discussing non-political issues with several dozen invitees at the ranch. He said that the justice was “animated and engaged” during dinner before he went to bed.

But in the morning, he was found dead with “a pillow over his head” after he failed to answer despite several knocks on his door.

If one finds a dead body, with a pillow over the head, it is safe to assume that a deeper investigation will occur, but Scalia was pronounced dead, by heart attack, over the phone and not by an medical examiner.

If this is foul play, and it certainly appears to be as the facts stack up, then the perpetrators would want a quick pronouncement and cremation to eliminate the evidence.

The President's behavior only solidifies the suspicion as he spent roughly “35 seconds in front of the casket and then approximately 67 seconds in front of the portrait of Scalia” and hours utilizing his bully pulpit and his puppets to press the issue that it is his right to immediately replace Scalia with someone of his choosing.

Yet, perhaps one of the most damning pieces of evidence is his joke at now deceased Justice's expense, demonstrating a callous disregard for the mourning Scalia family, as well as the nation.  View Obama's odious “joke” on the next page.