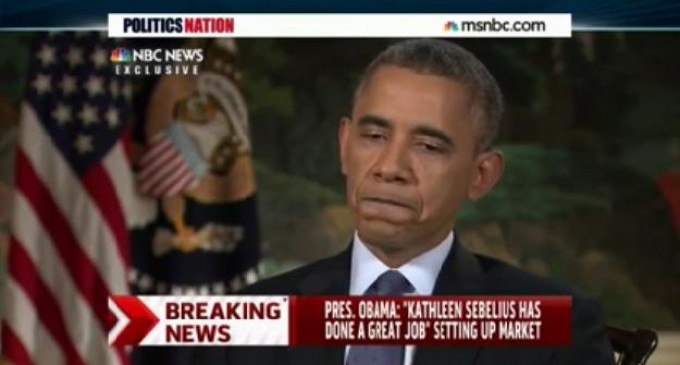 Yea, Mr. Soetoro, we feel soooo sorry for you getting personally burned by the Obamacare website failure.

After discussing the content of the Affordable Care Act in his exclusive interview with President Obama, NBC News’ Chuck Todd moved on to the troubles that have plagued HealthCare.gov since the website launched on October 1st. Expressing serious frustration with the way the law rolled out, Obama said his team–and the American people–”got burned” by a website that doesn’t work.

The president began by expressing how “deeply frustrated” he is about the website issues. “And, you know, I take responsibility of that,” he said. “My team takes responsibility of that. And we are working every single day, 24/7, to improve it. And it’s better now than it was last week. And it’s certainly a lot better than it was on October 1st.” He went on to add that he’s “confident” that it will be “even better” by November 30th, the deadline he has given his team to have it fixed. He did not promise it would be working perfectly by that date.

Having said all that, Obama added, “given that I’ve been burned already with a website–well, more importantly, the American people have been burned by–a website that has been dysfunctional, what we’ve also been doing is creating a whole other set of tracks.” He stressed how important it was for people to be able to sign up for insurance over the phone and in person. “What I’m confident about is that anybody who wants to buy health insurance through the marketplace, they are going to be able to buy it,” he said.

Obama dismissed Todd’s suggestions that the mandate on the law could be delayed due to the website glitches, saying that with the March 31st enrollment deadline still months away, “we’ve got a whole bunch of time not only to get the website fixed, to work out all the kinks, to make sure that everybody has the information that they need.”