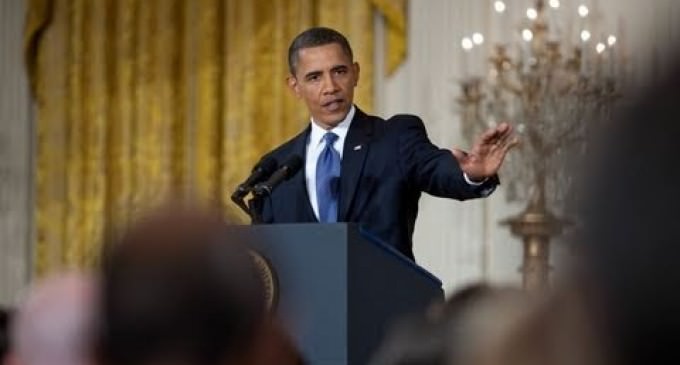 In a press conference today Obama basically stated that his taking actions as a dictator is democratic:

President Obama threatened to write his own laws through executive orders while claiming “that’s how democracy works.”

Responding to the Republican takeover of Congress yesterday, Obama said he will use executive orders if Congress doesn’t pass bills he wants to sign into law.

“I’m pretty sure I’ll take some actions that some in Congress will not like,” he said.  “That’s natural.”

“That’s how our democracy works.”

Obama singled out amnesty for illegals in particular, stating that if Congress passes an immigration bill which allows millions of illegal aliens to stay in the U.S., his executive actions will disappear.

“You send me a bill that I can sign, and those executive actions go away,” he said.

Obama is equating dictatorship with democracy.

“The president’s taste for unilateral action to circumvent Congress should concern every citizen, regardless of party or ideology,” Sen. Ted Cruz (R-Tx.) wrote in an op/ed in January. “The great 18th-century political philosopher Montesquieu observed: ‘There can be no liberty where the legislative and executive powers are united in the same person, or body of magistrates.’”

“America’s Founding Fathers took this warning to heart, and we should too.”

The father of the Constitution, James Madison, spoke about the dangers of an executive holding legislative power in the Federalist Papers No. 47.

“The accumulation of all powers, legislative, executive, and judiciary, in the same hands, whether of one, a few, or many, and whether hereditary, self-appointed, or elective, may justly be pronounced the very definition of tyranny,” he wrote.

In other words, the Founding Fathers feared a democracy in which the birth rights of the minority could be voted away by the majority, so they founded a republic meant to protect the rights of all.

But Obama has surpassed their greatest fears by turning the presidency into an autocracy which can whittle away the republic – and the birth rights of all – through executive orders.