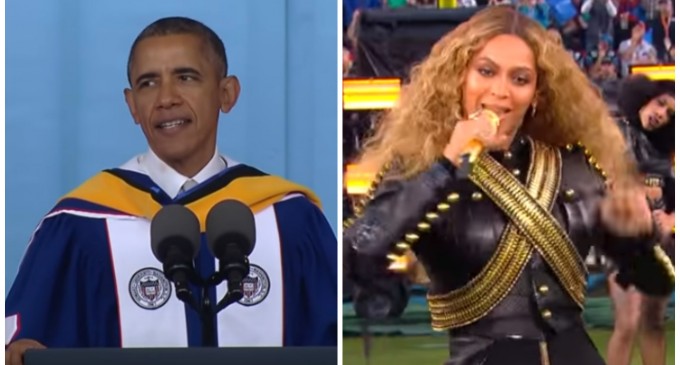 Obama's love affair with Beyoncé has been long standing, with invitations to the White House to sing twice, the White House Easter egg role and now his praise of her during his Howard University Commencement address.  In his own words, “Beyoncé runs the world.”  Perhaps this is why he and Michelle snuggle up to her, to ride her coattails into the future.

Michelle Obama also worships the ground the singer walks on, calling her a role model.

Michelle Obama has been fangirling over Beyoncé for years now, inviting her to the White House twice to sing at the innaugeration and tweeting her a birthday message last September that lauded her as the, “One and only Queen Bee.  Thank you for being a role model for young girls around the world”, shared Truth and Action.

Obama's commencement speech, to a university with a 91% African American student body, touched on the great strides the black community has made since the Civil Rights Act.

He claimed that America, indeed the world, is a better place today compared to when he graduated in 1983, stating that race relations are better and his reelection proves it.

What America is he talking about?  Race relations are worse under his reign!  Yet, in Obama's mind, in his world view, they are better because Beyoncé rules it! Read more on the next page.